Jen and Adam decided to  hike to Timpanogos Cave located up American Fork Canyon in Utah.  It is a National Monument and staffed by wonderful Park Rangers.   There are over 70,000 visitors ever year that hike the 1 1/2 mile trail, (gaining over 1,100 feet in elevation) to see the unique features of the cave (elevation 6,730 feet above sea level).  It takes 55 minutes to go through the cave and only 16 people are allowed in each guided tour.  Here is a view from the top at the cave entrance looking down at the trail (notice how steep it is, how narrow the trail, and how far down it really is!): 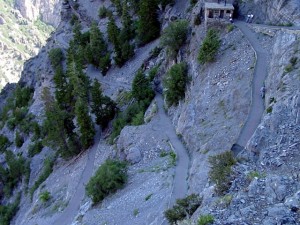 Timpanogos Trail looking downward from above

What they did not know was that there was an intense rainstorm in the mountains not too far away.  This same storm actually caused a game delay in the BYU football game being played that day in  nearby Provo, Utah.  The ESPN announcers said they had never seen anything quite like it- how quickly it blew in and its intensity and then quickly blew out.  Some called it a micro burst storm.  Anyway the rain from the storm caused rock slides in American Fork canyon.  The trail down from the cave was covered by the rock slide in numerous places.  AND they would later find out the road out of the canyon was also impassable due to rock slides.  Here’s a picture that somewhat sent to them showing them trying to climb across the rock slide covering that part of the trail: 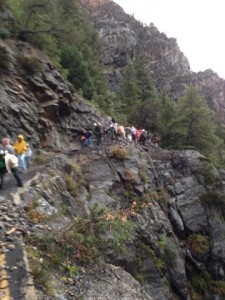 Look close, the guy high on the rocks with arm out is Adam trying to help Henry and Becca cross the rocks, the person straddling the rocks is Jennifer.  Caroline is hanging on the front of her is one of those soft carriers.  They blogged about their adventure on their blog.  So glad they (and all the hikers) made it down safely.  The Park Rangers were with them every step of the way.  It took hours to get down.  Once they got down they learned the road down the canyon was also blocked and they had to wait for UDOT (Utah department of transportation) to clear the rock slide from the road.  They made it home in the wee hours of the morning.  An afternoon hike had turned into a 10 hour life drama!!

Just a few days after their adventure I received a call from Jen and B.J. about their harrowing experience.  Theirs, unlike Jen and Adam, happened right in the “comfort” of their apartment.  They were enjoying a quiet evening together at home when an unusual noise caused them to look out their window, only to see a S.W.A.T. tank pulling up just outside their apartment.  Over the next few hours, locked inside their apartment with blinds pulled, they would  hear bullets flying, listen to the tactical S.W.A.T. team and frantically make calls, and look on the computer, checking TWITTER feeds to find out what was going on just outside the door of their apartment. At times they were on the floor.  The focus of the S.W.A.T was  on the apartment just down from them.  Apparently, a man with a gun threatened to kill his girl friend and then himself.  He would fire at the police and they fired at him and you can see the bullet holes in the picture: 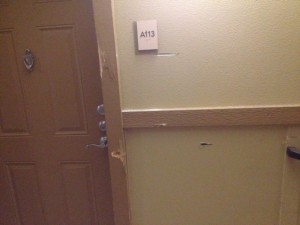 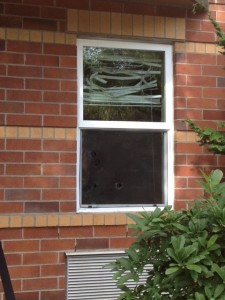 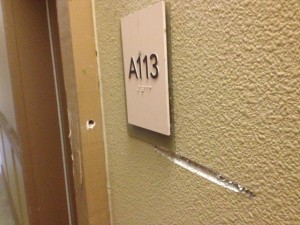 They also blogged about their experience.  Their blog also has some interesting news coverage links.

They got through their scary experience safe and sound, but it was an experience that one would not want to have ever again.