I guess because there are more people in the world Santa has sent out more and more Scout Elves.  I never saw a Scout Elf until my grandchildren were at my house for Christmas.  And ever since those Elves have been busy.  We have both a girl Elf and a boy Elf.  I am sure it is because I have both boys and girls for grandchildren, but whatever the reason we have TWO!  The Elves (and we definitely have the mischievous sort of  scout elves at our house) were up to their usual antics this Christmas season….

The elves switched out our toilet paper for white duct tape (This could get sticky!)… 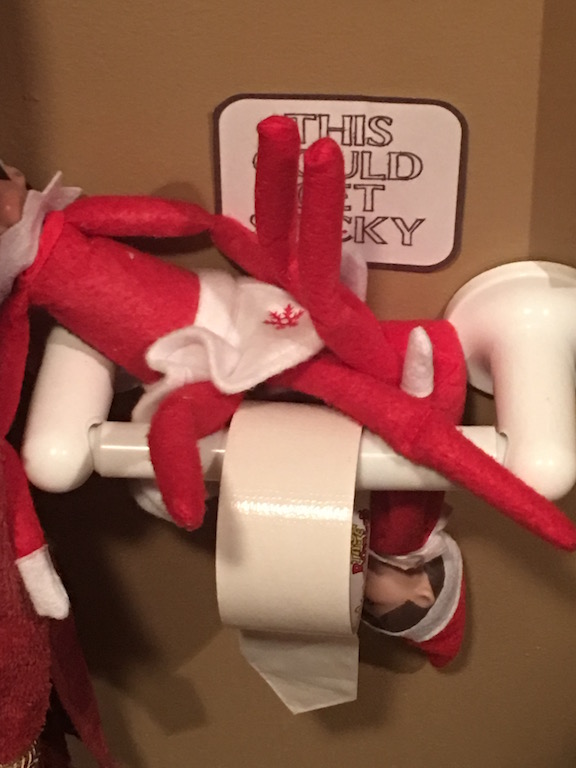 This could get sticky

They turned our bananas into minions! 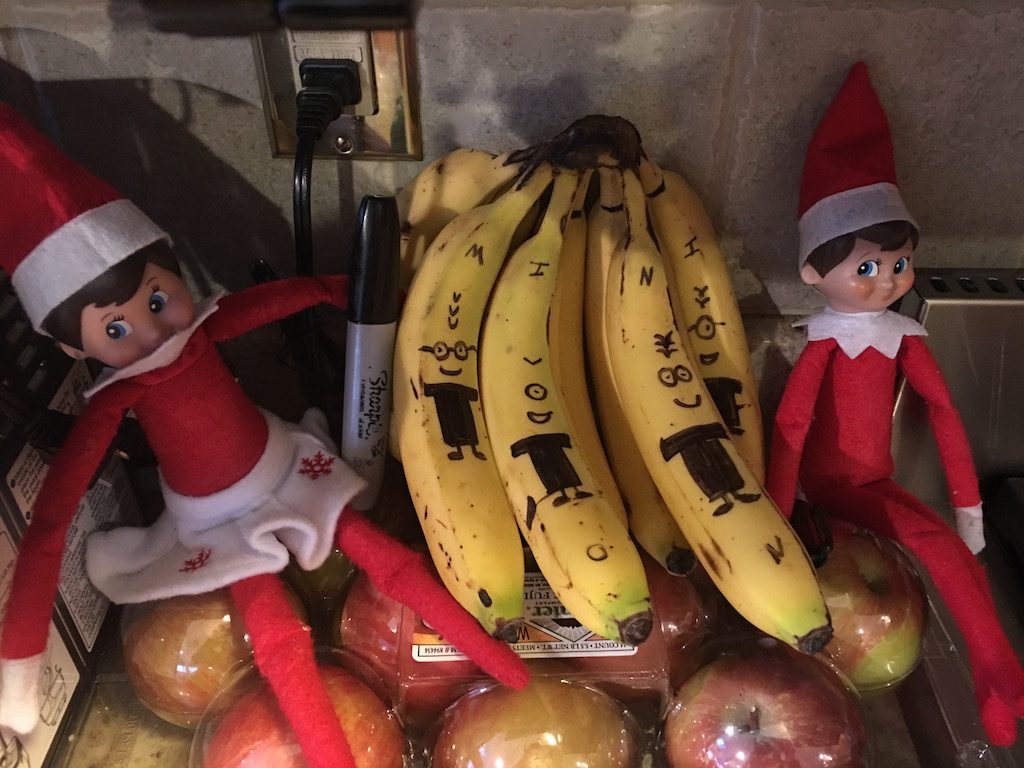 I left the flour out on the kitchen counter one night and lo and behold the elves made flour angels….it would be warmer than snow! 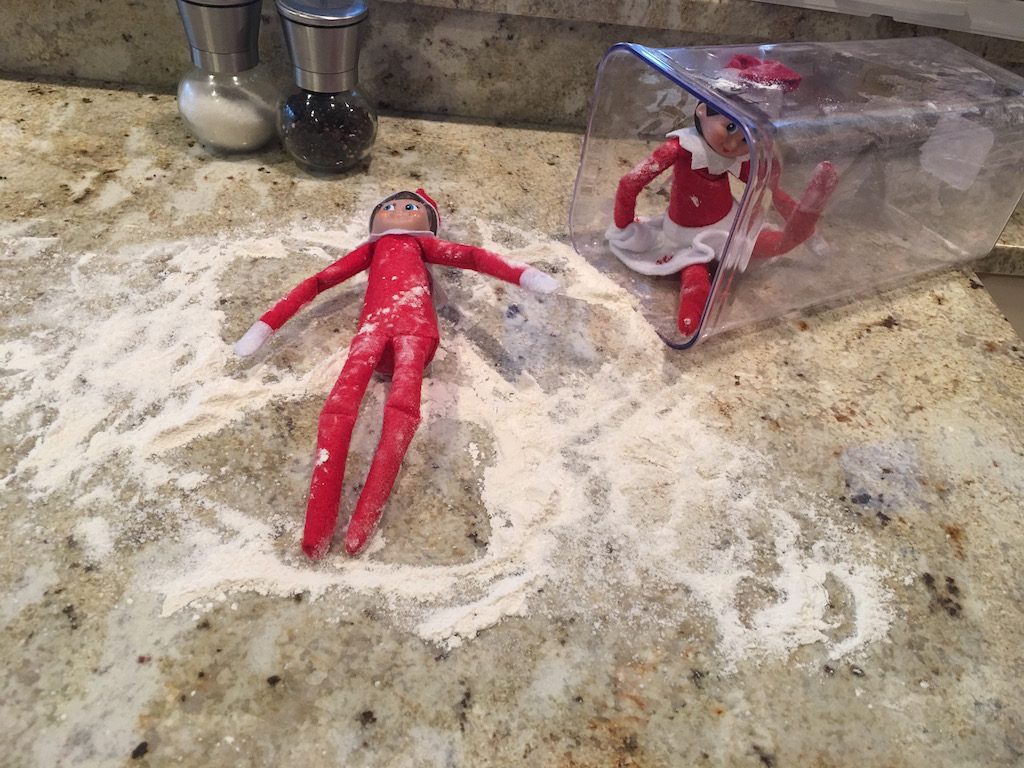 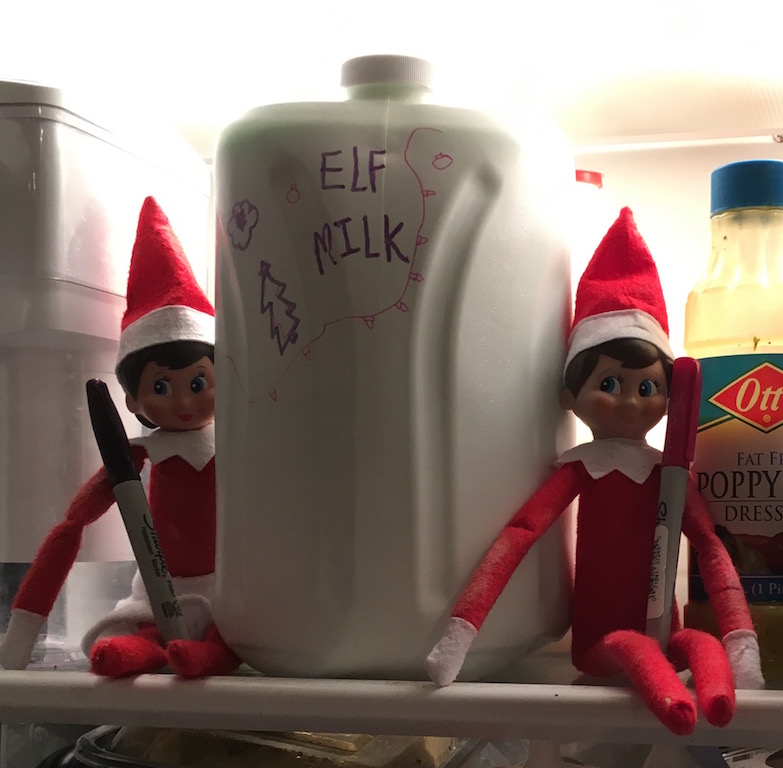 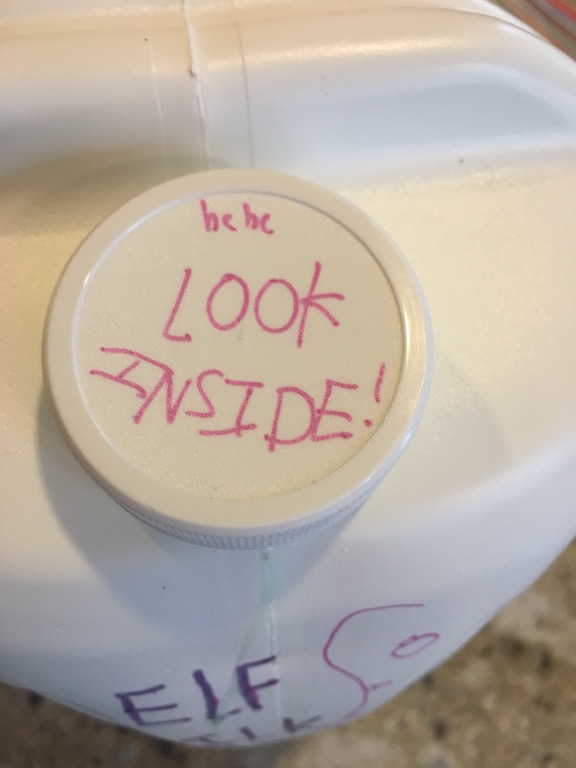 And sure enough we had Elf Milk!! 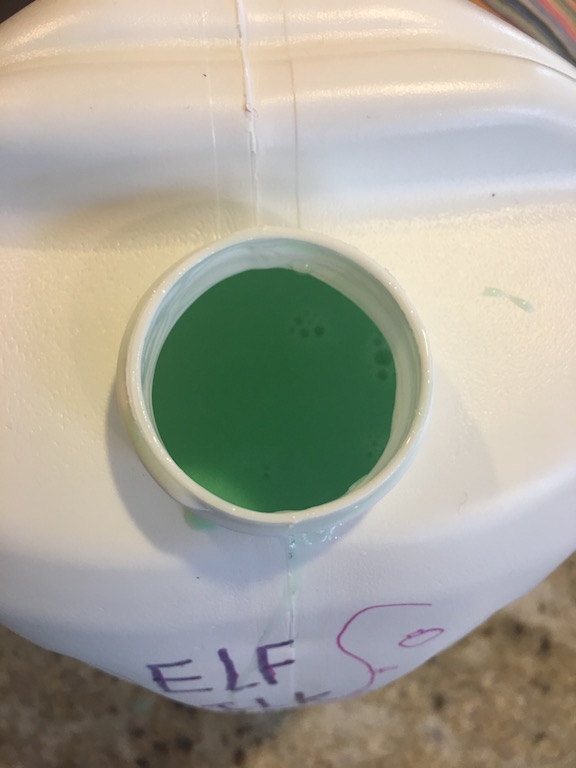 One morning we awoke to a cotton snowball fight. 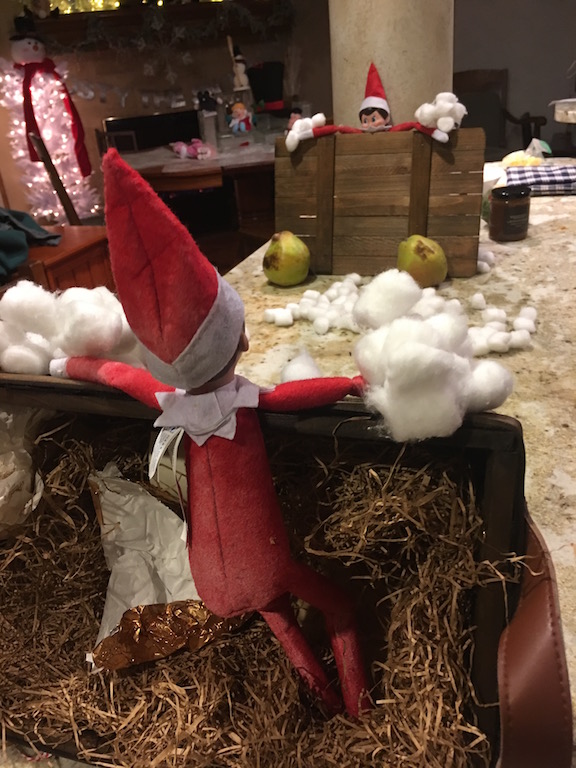 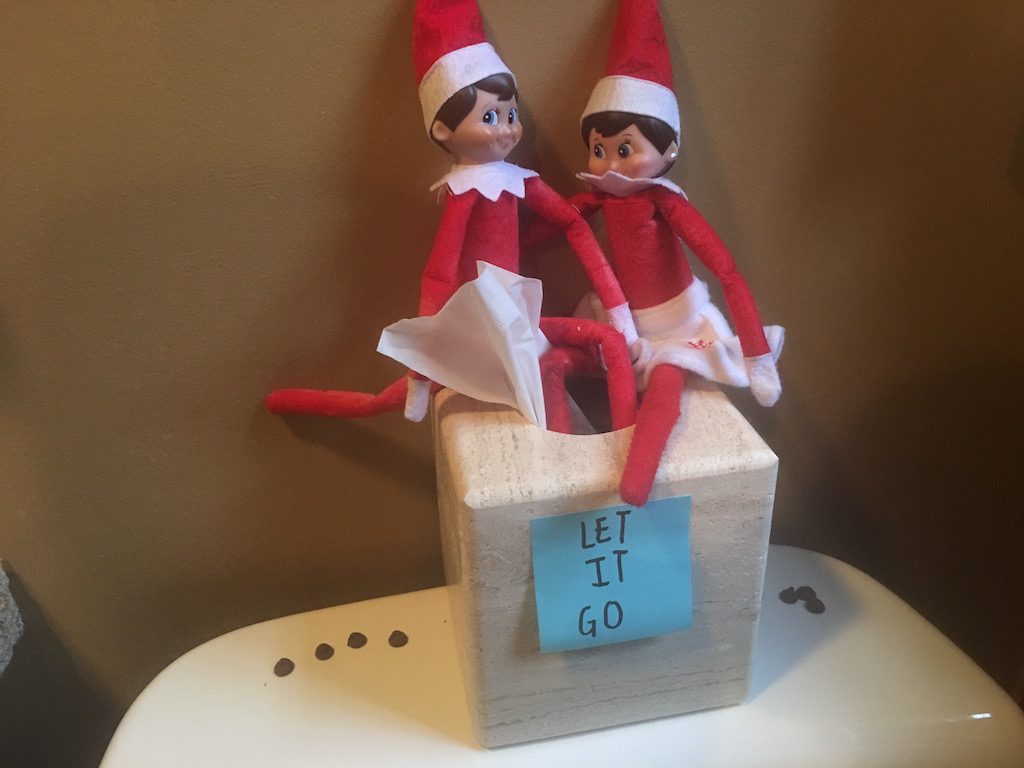 But as we approached Christmas Day the elves seemed to do less mischief and they even got creative: 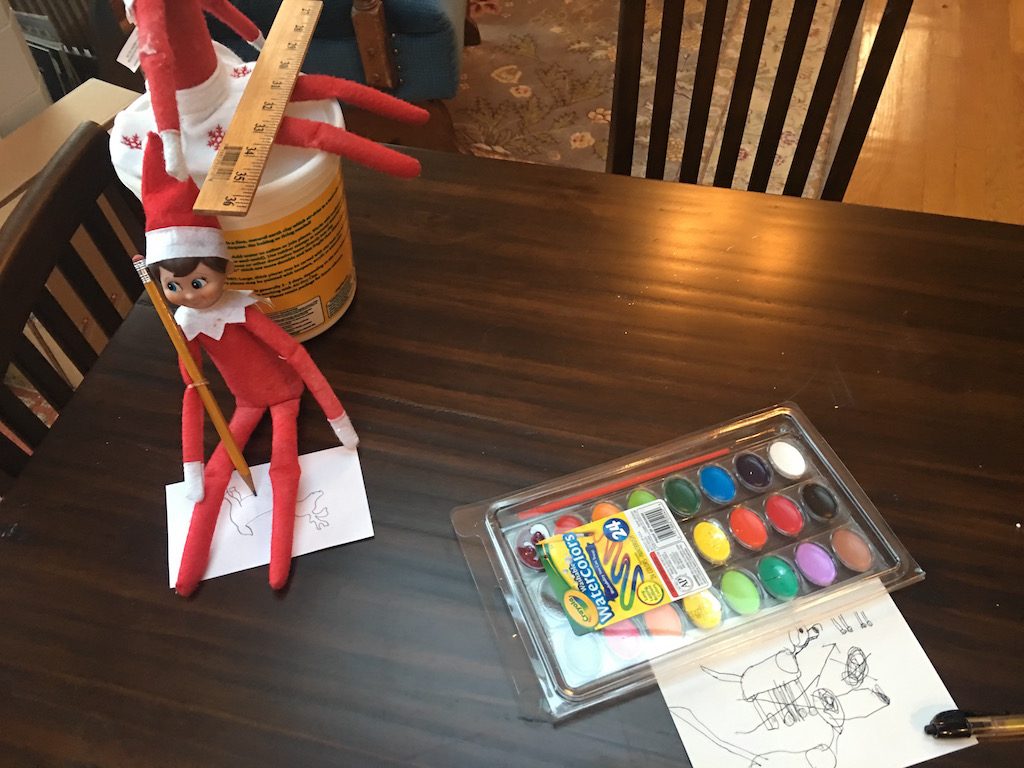 And of course no one wants to get into trouble the day before Christmas and the Elves even did their own nativity! 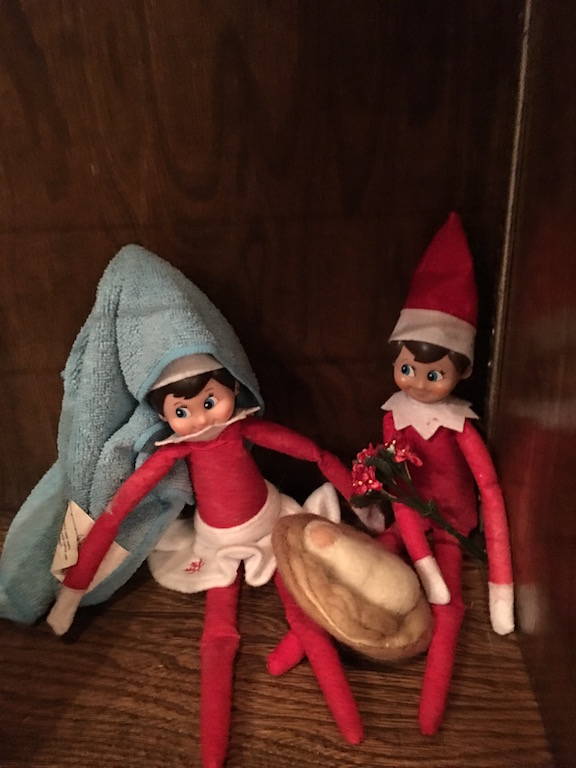 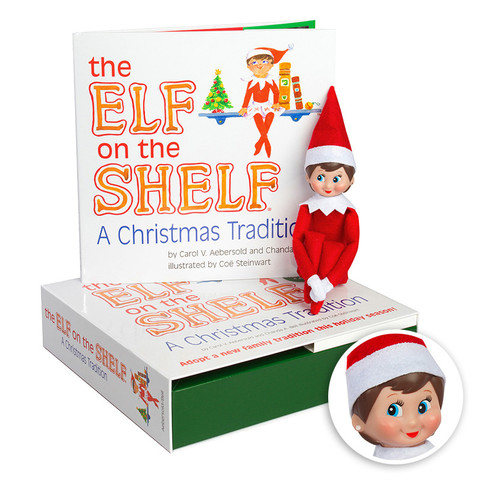 The Elf on the Shelf was written in 2004 by Carol Aebersold and daughter Chanda Bell over a cup of tea. Bell suggested they write a book about an old tradition of an elf sent from Santa who came to watch over them at Christmas time. Aebersold’s other daughter, Christa Pitts, was recruited by the family to share her expertise in sales and marketing. Together, the trio devoted the next three years promoting their self-published book and attending book signings and trade shows.

The Elf on the Shelf won the Best Toy Award by Learning Express won Book of the Year Award from Creative Child Awards and National Best Books Award sponsored by USA Book News in 2008. In 2012, The Elf on the Shelf made its first appearance in the Macy’s Thanksgiving Day Parade alongside fellow parade newcomers Hello Kitty and Papa Smurf. In 2013, The Elf on the Shelf hit the #1 spot on the USA Today Bestsellers List.

We seemed to be visited by both a boy and girl elf. 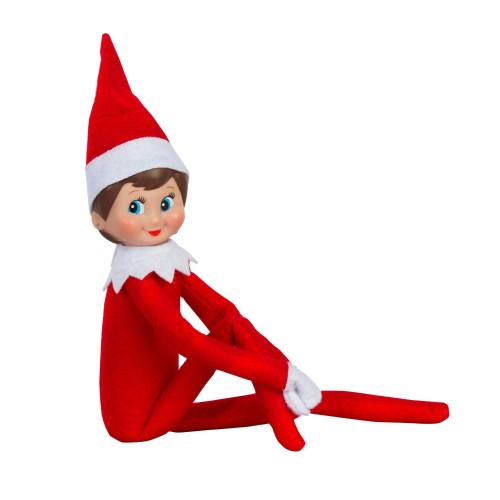 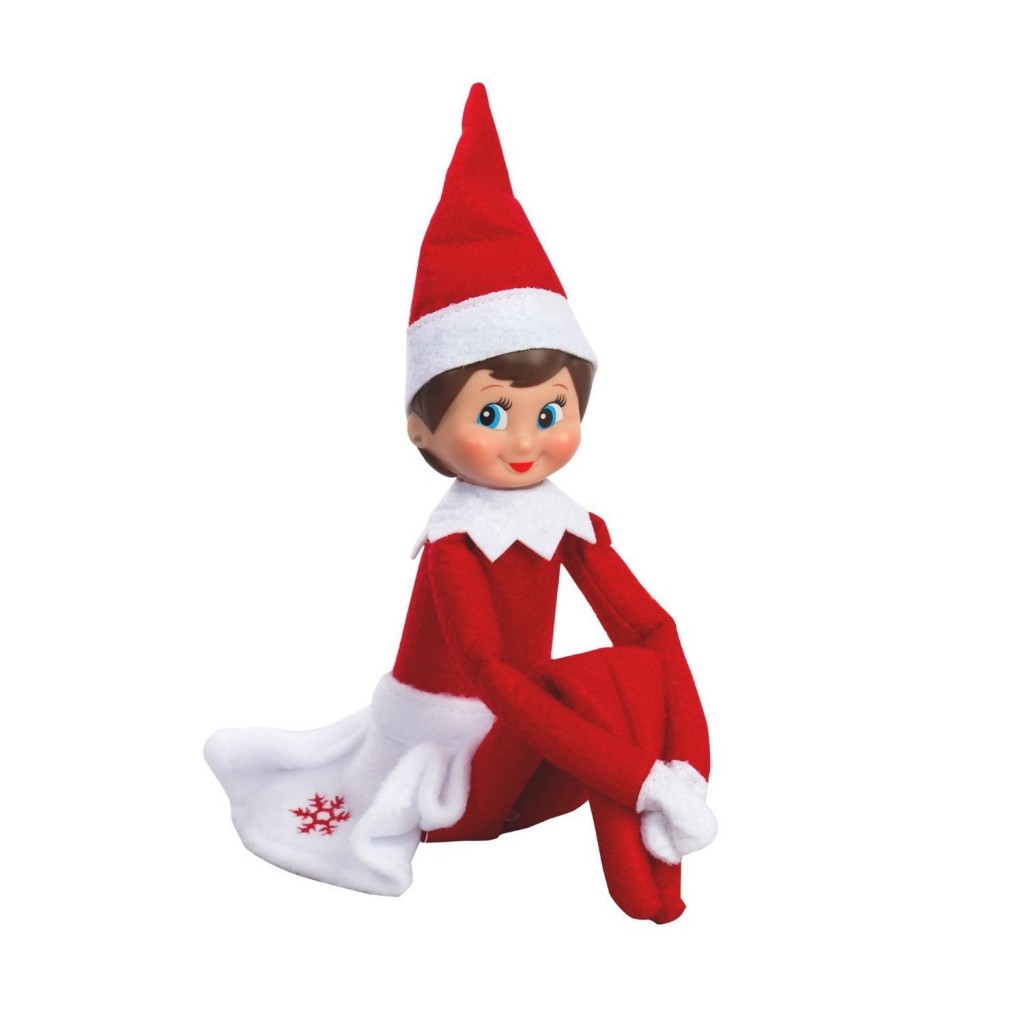 And as you can see they seemed to do their thing each evening and each morning we made our discovery of some of the things they were up to during the night.  I captured a few of their antics… 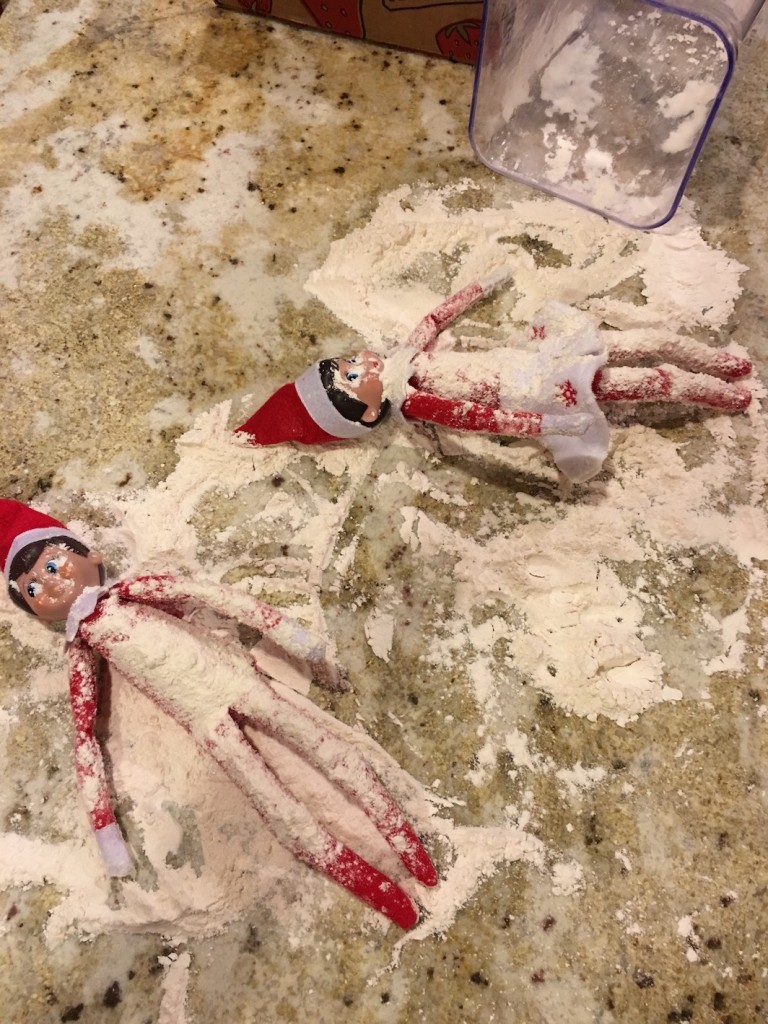 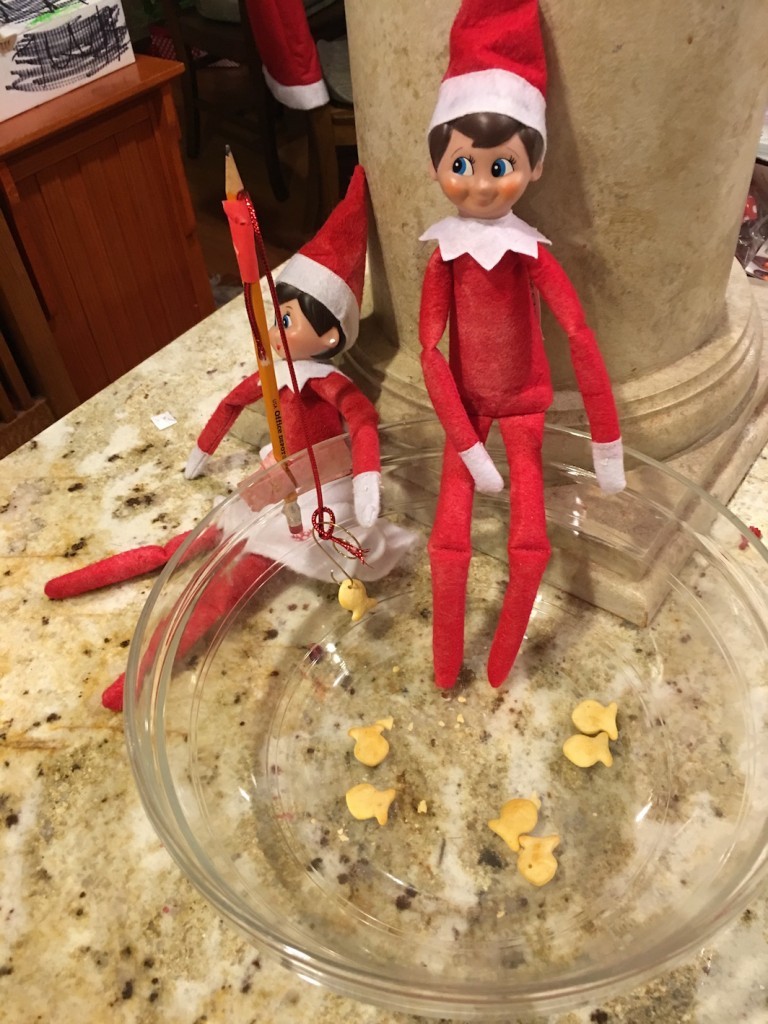 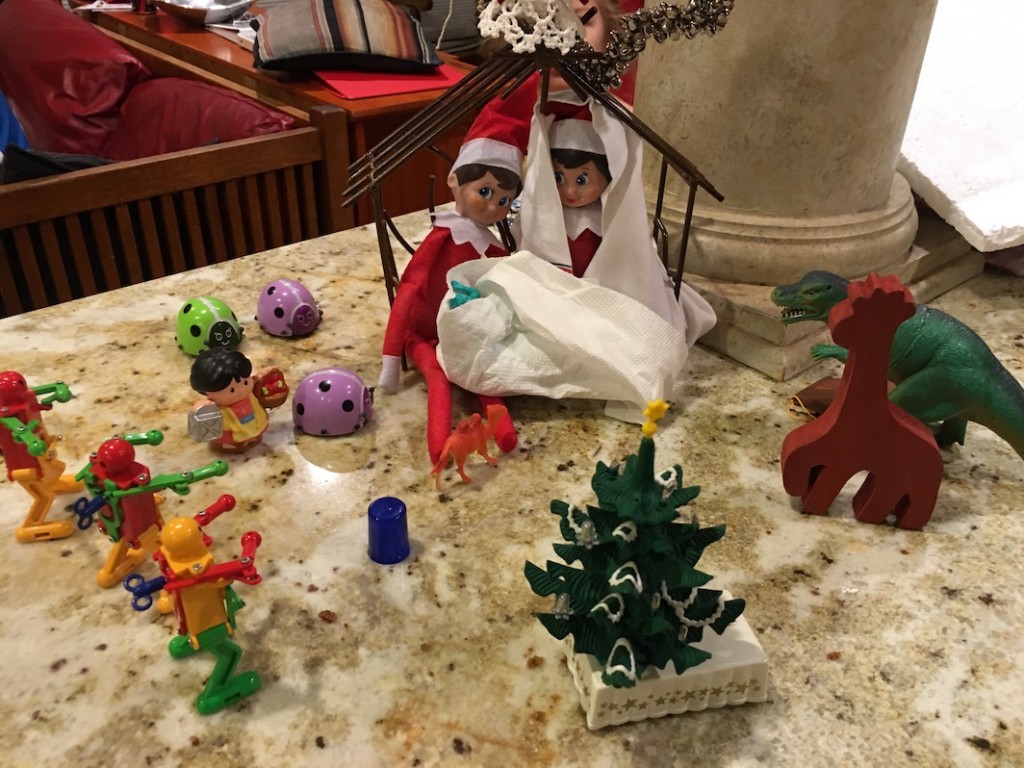 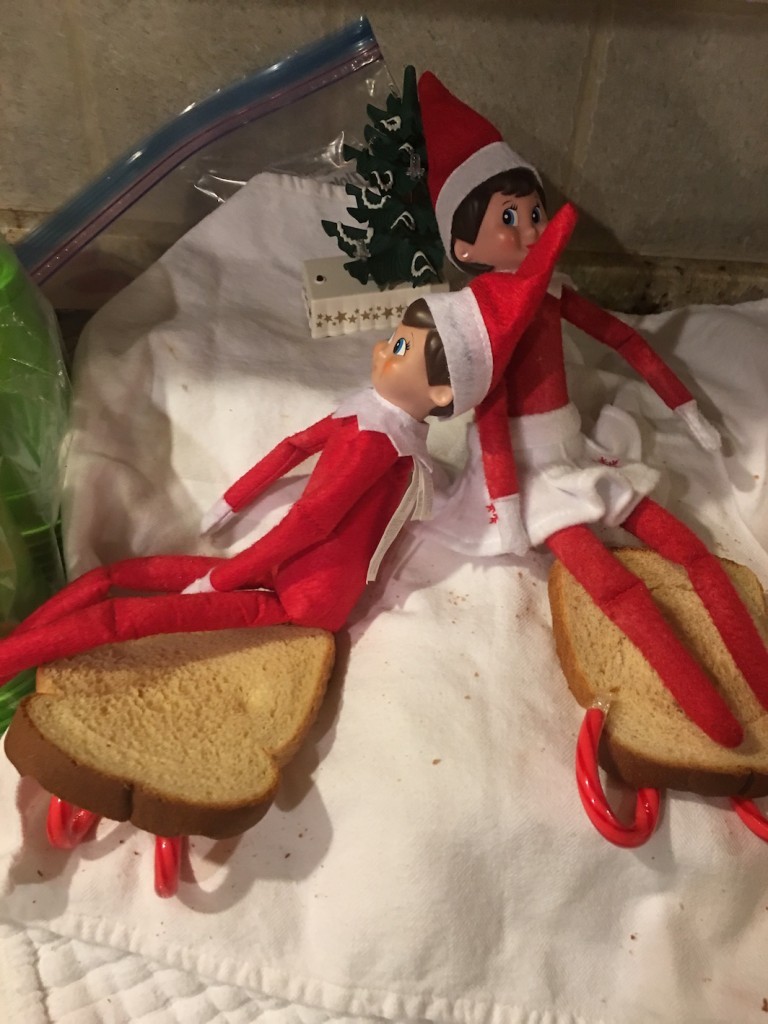 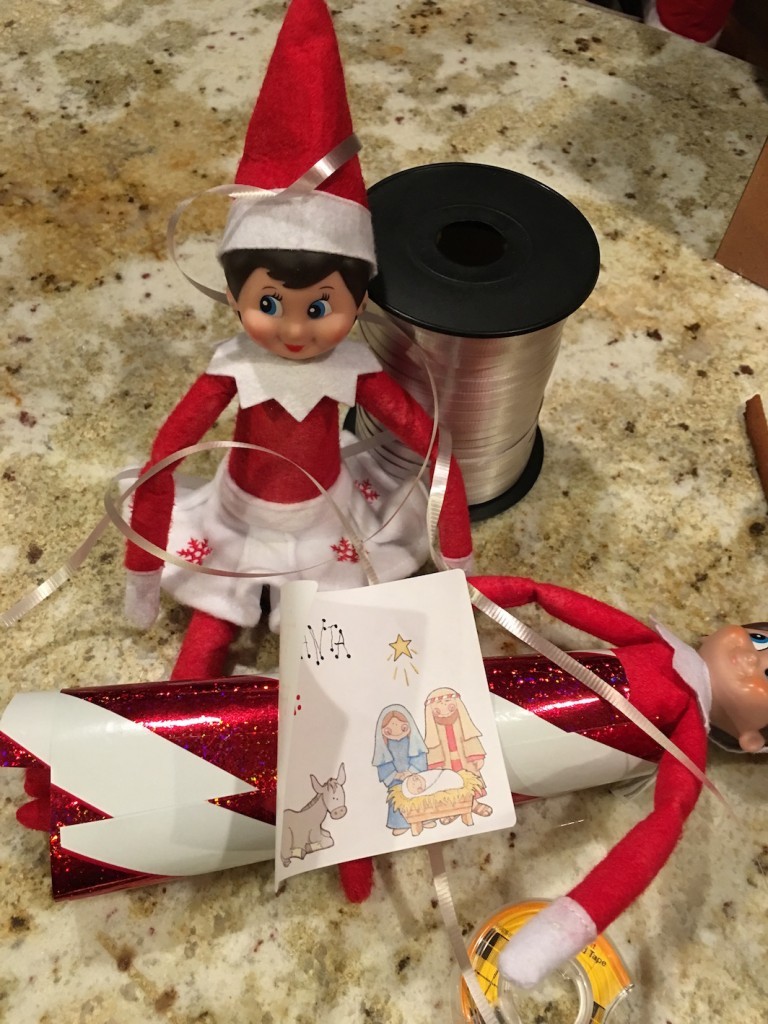 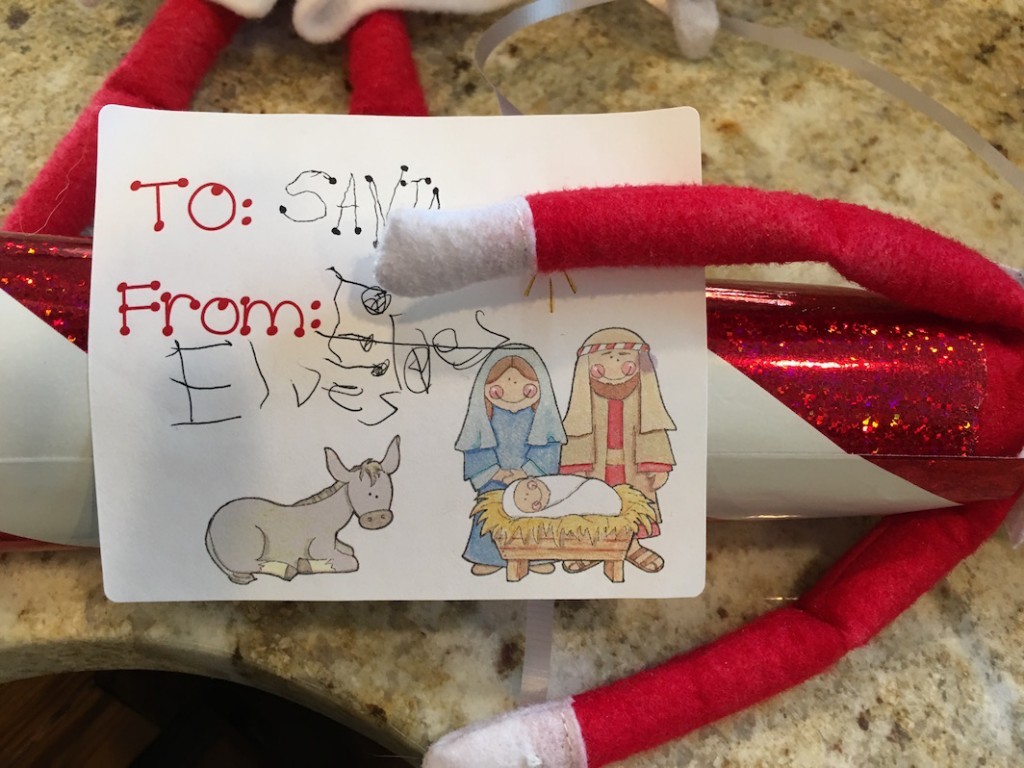 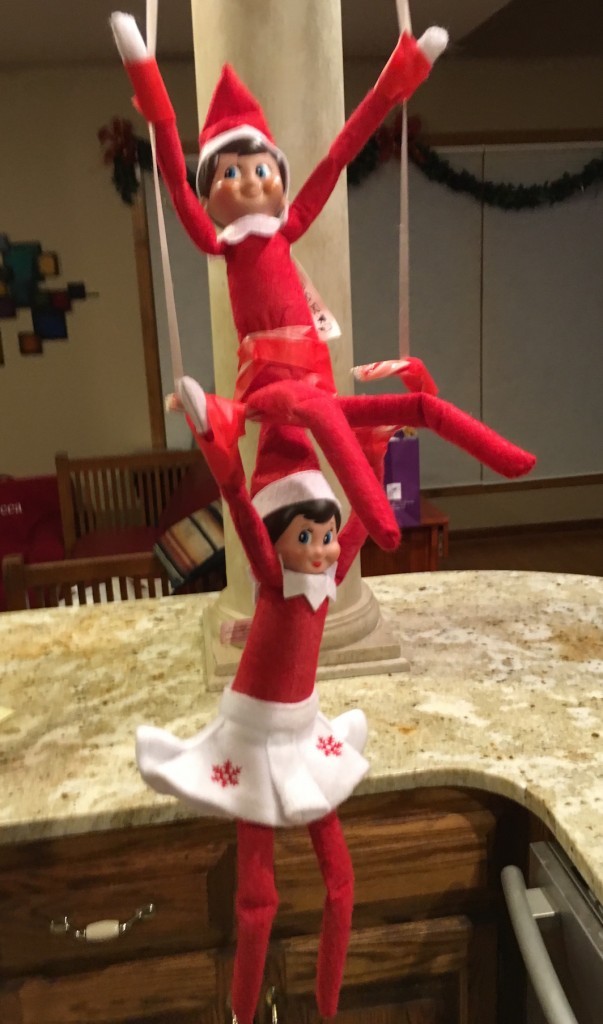 Elves on a trapeze