The early history of the LDS church in Missouri is a harsh chapter.  But as a member of the Church of Jesus Christ of Latter-day  living in the Kansas City area it is a heritage that one can be proud of the strength and courage of these early saints.  It is also a treat to live  so close to the early historical sites; Independence, Liberty, Far West, Gallatin, Richmond and Adam-ondi-ahman just to name a few.

A couple of years ago as part of my calling in the Stake Young Women’s Presidency we had a youth conference which focused on these historical areas and the history of the early saints in the area.  I was charged with the assignment of presenting some short vignettes to the youth recreating some key moments in the early church history in Missouri.  Interestingly enough we were forced to move the Youth Conference back to the Stake Center in Olathe as a fierce thunder, hail storm with tornado warnings had the authorities telling us to leave the area immediately.  (The storm that stopped the Missourians from attacking Zion’s Camp must have been similar.)

Please let me know if you use these vignettes!

The events portrayed in these vignettes occurred during the early history of the church in Missouri.  The setting is the 1830’s.  The characters in each vignette are real people, except for the fictional characters “Rath” and “Vern” (Missourians) and the Narrator, Elijah Andrews (an Eastern reporter).  These characters are created and used in telling the story of the early saints in Missouri.  All the remaining characters are actual people portrayed in their correct historical setting. Actual names are used, with actual quotes by these people are in boldface type.  There are six vignettes.

Historical Synopsis:  Sisters, Mary Elizabeth (15 years old) and Caroline Rollins (13 years old) live in Independence, Missouri in 1833.  These young women are witnesses as an angry mob destroys the home and printing press of William W. Phelps.  W. W. Phelps is working on publishing the Book of Commandments for the Saints when the attack occurs.  The mobs are determined to destroy the home of W.W. Phelps and everything in it including the valuable printing press.  The mobs also want to destroy the printed pages of the Book of Commandments.  The newly printed pages of the Book of Commandments are saved by the heroic actions of Mary Elizabeth and Caroline Rollins in the face of formidable danger to themselves.  Copy of vignette one (pdf).   Copy of vignette one (doc).  (It will appear in your download folder.) 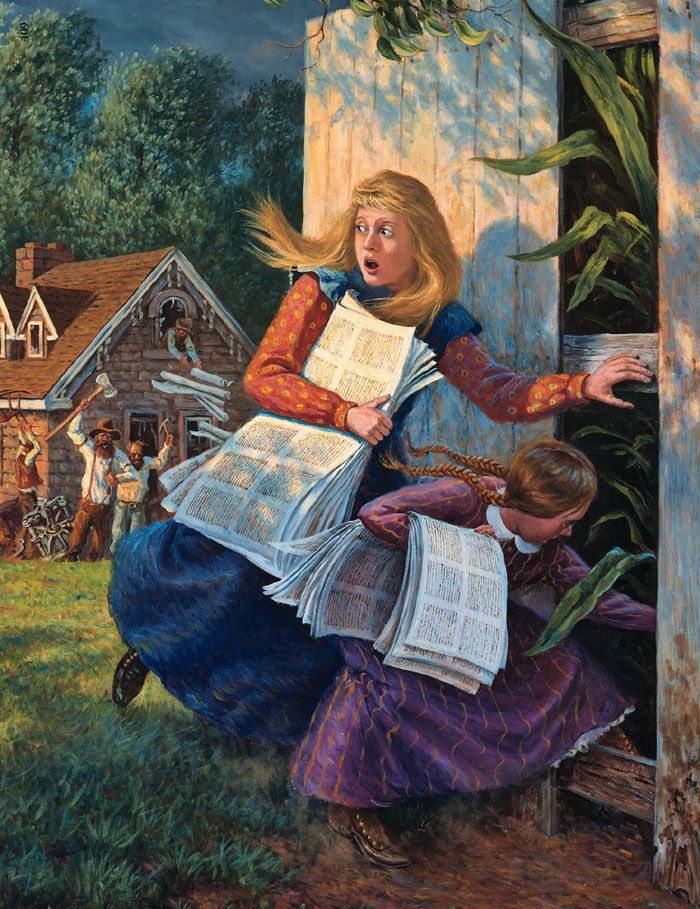 Historical Synopsis:  In 1836, two counties are created for the Mormons in Missouri, Clay and Caldwell counties.  By 1838, Far West in Caldwell County has become the headquarters of the church.  The Prophet Joseph Smith has left Kirtland, Ohio and has settled in Far West.  More Mormons are arriving daily.  At the 1838 Fourth of July Celebration Sidney Rigdon, as a spokesman for the First Presidency, gives an oration.   Many historians have felt Rigdon’s speech may have contributed to the growing difficulties between the Saints and the Missourians.  Copy of Vignette Two (pdf). Copy of Vignette Two (doc). (It will appear in your download folder.) 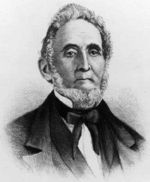 Historical Synopsis:  The Gallatin Election Day Battle was a skirmish between Mormon and non-Mormon settlers.  Two major candidates for office, Colonel William Peniston and Judge Josiah Morin visited Adam-ondi-Ahman to court the Mormon vote.  Afterward, Peniston decided that the Mormons planned to vote as a bloc for his opponent and conspired to prevent them from voting, by force if necessary.  When Election Day arrived, Peniston made a speech in Gallatin to stir up the crowd against allowing the Mormons to vote.  When about 30 Latter Day Saints approached the polling place approximately 200 non-Mormons forcibly attempted to prevent the Mormons from voting and a brawl ensued. Although vastly outnumbered, the Mormons held their own and drove away their attackers. Copy of vignette three (pdf).  Copy of vignette three (doc). (It will appear in your download folder.) 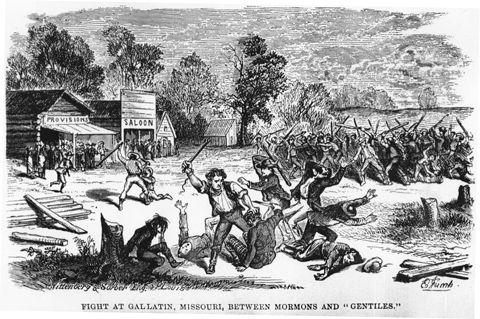 Historical Synopsis:  Tension between the Mormons and Missourians increases to the point Governor Boggs of Missouri calls out militias to patrol the Mormons. Rumors reach Far West that Mormon prisoners have been taken by a mob of vigilantes from Ray County.  An armed party quickly assembles to rescue these prisoners.  When the Mormons arrive on the scene, the state militia unit is camped along Crooked River.  The Mormons divide into three columns led by David W. Patten (an apostle), Charles C. Rich and James Durphee.  The Missourians have the advantage of position and fire, but the Mormons continue to advance.  This causes the state militia to break ranks and flee across the river.  Although Mormons win the battle, they take heavier casualties than the Missourians.  The Mormons lose one during the battle and nine are wounded, one mortally.  Apostle, David W. Patten is wounded and soon after the battle dies from his wounds.   Tensions continue to increase between the Mormons and Missourians resulting in an executive order being issued on October 27, 1838 by Missouri governor Lilburn Boggs.  The order is in response to what Boggs terms “open and avowed defiance of the laws”.  This order is an order of extermination.  The order remains on the law books of Missouri until formally rescinded in 1976. Copy of Vignette Four (pdf).  Copy of Vignette Four (doc).  (It will appear in your download folder.) 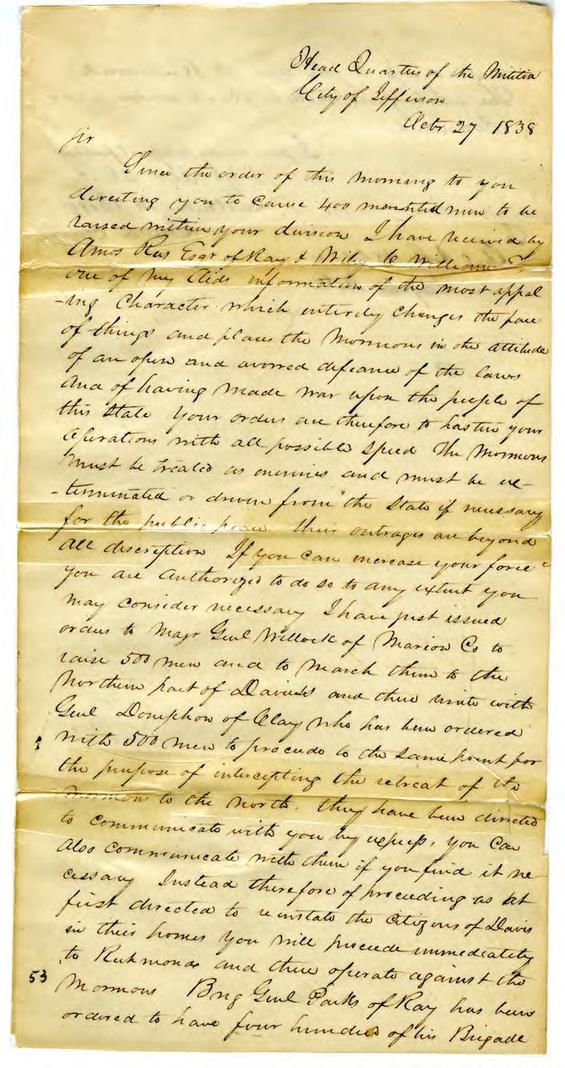 The Extermination Order of Governor Boggs.

Historical Synopsis:  On October 30, 1838, the bloodiest event in the 1838 Mormon War in Missouri occurs.  It happens on the banks of Shoal Creek in Caldwell County, Missouri, near a mill that was established by the Haun family.  Approximately 30 Mormon families live in the immediate vicinity of Haun’s Mill and the blacksmith shop.  About 4:00 p.m. on this infamous day a militia of 240 men ride into the settlement of Haun’s Mill.  David Evans, a leader in the community, runs towards the militia, waving his hat and calling for peace.  Alerted to the militia’s approach, most of the Latter-day Saint women and children flee into the woods to the south, while most of the men head into the blacksmith shop.  Unfortunately, the building is a particularly vulnerable structure as the widely spaced logs make it easy for the attackers to fire inside.  The shop becomes a deathtrap, since the militia gives no quarter, firing about one hundred rifle and musket shots into the building. After the initial attack, several of those who are wounded or have surrendered are shot dead. Members of the militia enter the blacksmith shop and find ten-year-old Sardius Smith hiding under the blacksmith’s bellows. William Reynolds puts his musket against the boy’s skull and blows off the top of his head. Reynolds later explains, “Nits will make lice, and if he had lived he would have become a Mormon.”  Seventy-eight year old Thomas McBride surrenders his musket to militiaman Jacob Rogers, who then shoots McBride and hacks his body apart with a corn knife. Several other bodies are mutilated and clothing stolen, while many women are assaulted. Houses are robbed, wagons, tents and clothing are stolen, and horses and livestock are driven off, leaving the surviving women and children destitute.  By the end of the skirmish seventeen Mormons are dead: Hiram Abbott, Elias Benner, John Byers, Alexander Campbell, Simon Cox, Josiah Fuller, Austin Hammer, John Lee, Benjamin Lewis, Thomas McBride (78), Charley Merrick (9), Levi Merrick, William Napier, George S. Richards, Sardius Smith (10), Warren Smith, and John York. Thirteen more have been injured, including a woman and nine-year-old child. A non-Mormon sympathizer is also killed. Three of the 250 militiamen are wounded, but none fatally. After the massacre, the dead are placed in an unfinished well and are covered with dirt and straw. The survivors and their wounded gather at Far West for protection.  Although participants in the massacre boast of their acts for years, none of the Missouri attackers are ever brought to trial.  Copy of Vignette Five (pdf).  Copy of Vignette Five (doc).  (It will appear in your download folder.)

Historical Synopsis:  Far West becomes the focal point as anti-Mormon militias gather around Far West to prepare for an attack.  The Saints in Far West are out-numbered five to one.  They barricade the city with wagons and timber around the perimeter in an attempt to protect themselves. Neither side is eager to begin the battle.  On October 31, 1838 General Lucas for the Missourians sends out a flag of truce, which is met by the leading officer for the Saints, Colonel Hinkle.  Colonel Hinkle secretly and subversively agrees to all of the demands made by General Lucas including surrendering the city and turning over Joseph Smith and other Mormon leaders for trial and punishment.  Hinkle also agrees that Mormon property is to be confiscated by the militia to pay for damages and the Saints are to surrender their arms and leave the state.  Joseph Smith and the other leaders are told by Hinkle that General Lucas would like to talk to them in a peace conference.  They are shocked when Hinkle turns them over to Lucas as prisoners.  A secret and illegal court-martial is held during the night.  The prisoners receive a sentence to be executed the next morning on the public square in Far West.  General Alexander Doniphan receives the order and heroically refuses to comply calling it ”cold blooded murder.”  Lucas seems to lose some of his nerve, and takes the prisoners to jail in Richmond, Missouri.  Joseph Smith and the other leaders are held in chains in the Richmond jail. For two horrible weeks the prisoners receive much abuse from the guards.  One night after hours of obscene jests, bragging, blasphemies and filthy language from the guards, the majesty of the Prophet Joseph Smith is witnessed, as he stands in chains and rebukes the guards.  The quailing guards drop their weapons, fall to their knees, and crouch at the feet of Joseph Smith and beg for his pardon.   All the evidence is stacked against the church leaders in a 13-day sham trial.  When the prisoners submit a list of defense witnesses, the witnesses are either jailed or driven from the county.  Alexander Doniphan acts as counsel for the saints and reports that, “if a cohort of angels were to come down, and declare [the prisoners] were innocent, it would all be the same for he (the Judge) had determined from the beginning to cast [them] into prison.” After the trial ends Joseph Smith and others are placed in Liberty Jail.

Meanwhile in Far West, General John B. Clark, the designated commanding officer arrives in Far West.  He says he will not force the Saints out of Missouri in winter but forces them to live on parched corn.  The Mormon militia expects compensation from the Saints. Saints are forced to sign over their lands to the Missourians.  The troops at Far West plunder everything they can lay their hands upon, taking anything of value.  With no help from the government and conditions growing desperate thousands of Saints are forced to leave Missouri in the dead of winter seeking shelter anywhere they can seek refuge.  Most settle across the Missouri border near the Illinois town of Quincy.  It would be spring before Joseph Smith and others would find their way to join the Saints in Illinois.  Thus ends a tragic chapter in Missouri church history. Copy of Vignette Six (pdf).  Copy of Vignette Six (doc). (It will appear in your download folder.) 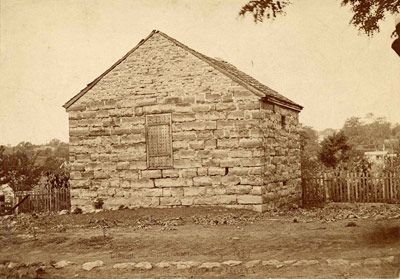