I thought it might be fun to share some of my nativities from my collection.  These are some that I added this past year.

Nativity from Liberia made from bullets.

This Nativity set is made from brass AK-47 bullet casings. Each casing is cut open and pounded flat, designed, then cleaned with solvents and polished with sand. The Nativity was created by a young man named Calvin Fayiah in Monrovia, Liberia. The set includes 11 pieces: Joseph, Mary, baby Jesus in manger, an angel, a shepherd with a lamb around his shoulders, two sheep, three wise men, and one camel. The figures measure 2 inches tall.

The bullet casings used in this Nativity have a dramatic story. The casings were collected from streets and villages throughout Liberia as a leftover remnant of the First and Second Liberian Civil Wars (1989–2003). The second war between three rival groups caused the death of 150,000 Liberians and the displacement of hundreds of thousands more.  The sobering scene of bullet casings discharged everywhere was a common site throughout Liberia for many years after the war ended.

In addition to our admiration for the historical significance of these bullet casings, we admire the important symbolism of Peace where stark tokens of violence are converted into a peaceful representation of Jesus’ birth, which is the crowning definition of Peace in human history.

Calvin uses the income from his bullet Nativity to put himself through a criminal justice program as a first step into a law career in Liberia. 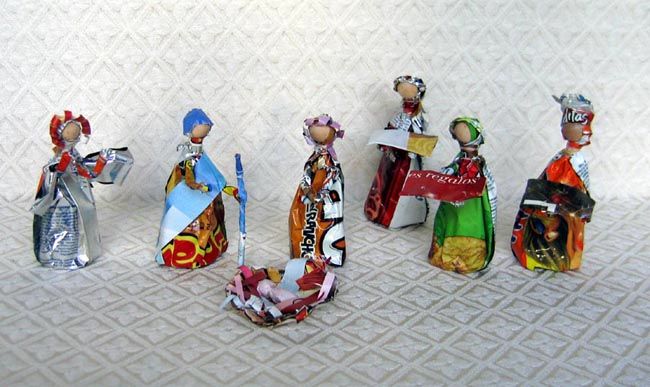 Nativity made from snack bags from Honduras.

This Nativity set is made from snack bags fastened over wire frames. The bags are cleaned and cut or folded into the desired shapes, then glued to the frames. All of the figures have wood faces. The figures are made by a woman named Luz in Trujillo, Honduras.

Another nativity from Honduras: 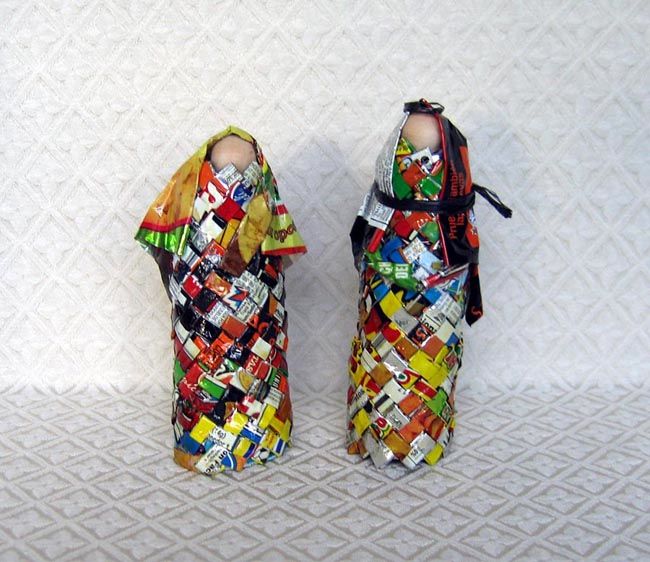 This Holy Family is made from intricately woven snack bags. The bags are cleaned and cut into strips the size of gum wrappers. Then the strips are folded so that the pieces can be woven into each other. Mary holds baby Jesus. Both Mary and Joseph have wood faces. Joseph stands 6 inches tall.

The figures are made by a boy named Freddie in Trujillo, Honduras. This project is an effort to teach youth skills that they can use to earn income once school is done for them.
I purchased these nativities from www.worldnativity.com. 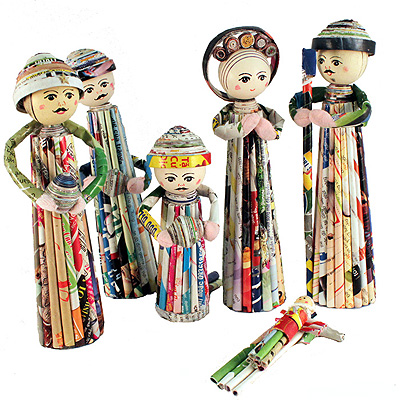 Multiple layers of rolled, coiled and lacquered recycled magazines create these colorful figures. Made in Vietnam.

I found this beautiful antique Hummel figurine nativity, from the 1950’s. 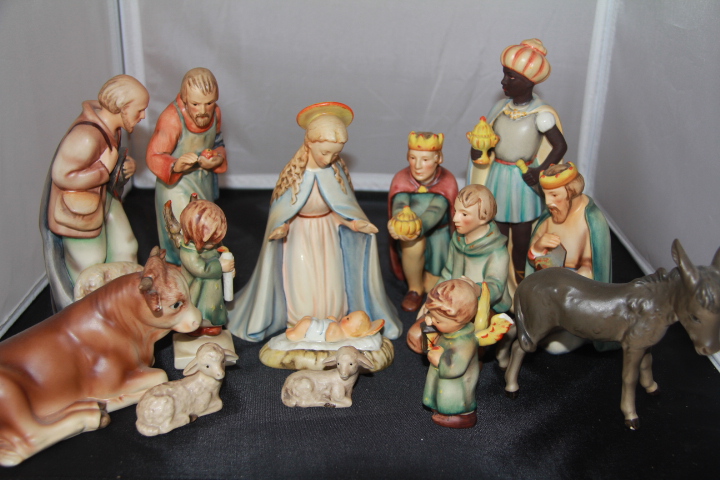 The next three are handmade nativities I found on Etsy’s website: 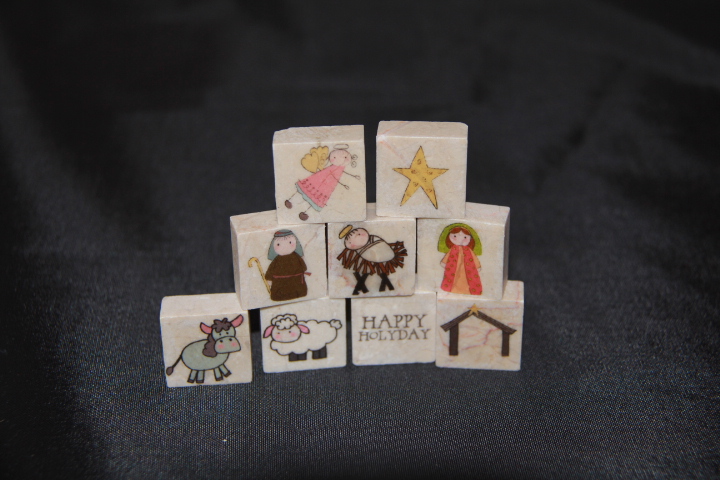 Tiny tiled nativity handmade by an artist on Etsy. 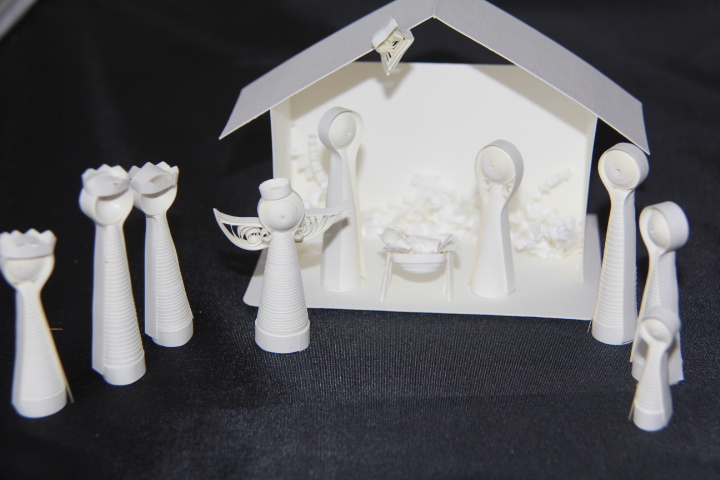 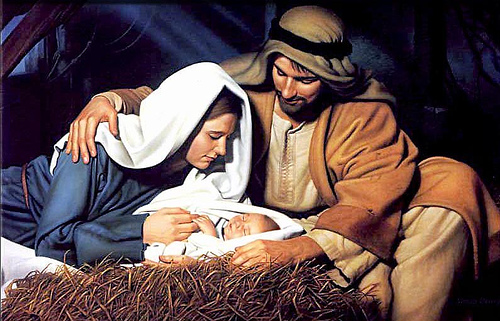 A great Christmas Program is the Vignette called; Mary, Mary, Mary. It is about the mother of Christ. There are three Mary’s; one the young Mary when she finds out she is to have the Christ Child. The second is the mother Mary, a new mother, pondering how she is to raise Jesus and the final Mary is older Mary wondering how it is her son, is the Savior to the world. It is the nativity story told from a fresh perspective, from the viewpoint of the mother of Jesus the Savior. It has every mother’s worry’s and every mother’s concerns, but it is the mother of Christ our Savior. This vignette evolved over several years, evolved with each performance until it evolved to this moving story of Jesus Christ and his birth, his life and his crucifixion through the eyes of his mother, as only a mother could tell the story. I am glad to share this story with everyone. Please make sure that credit is given to the author; Shelley Smith Beatty.

Please leave your comments and let me know if you use the program. 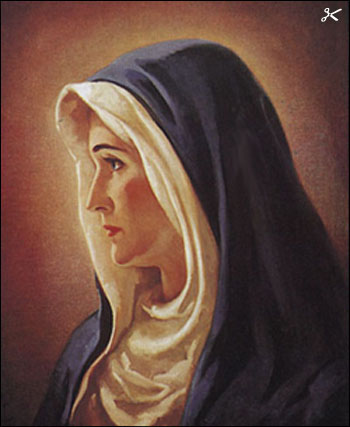 Beaverton Ward, Beaverton Oregon Stake did the Mary, Mary, Mary program for a special Relief Society Christmas Program.  They did a shortened version of the script (only about 10 minutes total). It was edited by their Relief Society President Lynn Stephens.  In Sister Stephens own words,  “Today at our Christmas Breakfast, three sisters performed the shortened version of MARY, MARY, MARY.  It was so loved and touching…the 3 perspectives were so unique, engaging, & insightful! ”

Thank you for sharing with us!

Here are the links to their shortened version:

Another idea for a Christmas lesson:

and another set of Christmas Stories can be found here!