B.J. was able to take a day off of work and we set out to visit the Columbia River Gourge. 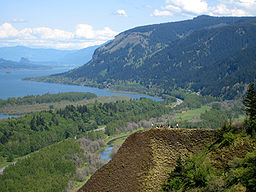 The Columbia River Gorge is a canyon of the Columbia River in the Pacific Northwest of the United States. Up to 4,000 feet (1,200 m) deep, the canyon stretches for over 80 miles (130 km) as the river winds westward through the Cascade Range forming the boundary between the State of Washington to the north and Oregon to the south. Extending roughly from the confluence of the Columbia with the Deschutes Riverdown to eastern reaches of the Portland metropolitan area, the gorge furnishes the only navigable route through the Cascades and the only water connection between the Columbia River Plateau and the Pacific Ocean.

We headed to Multnomah Falls 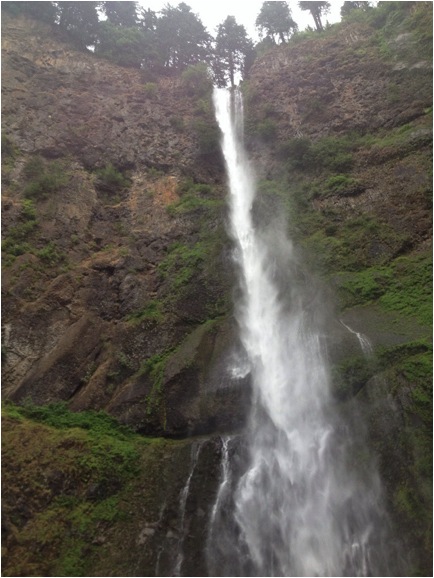 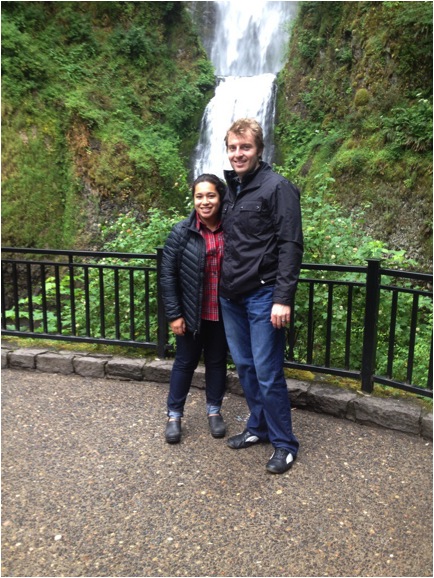 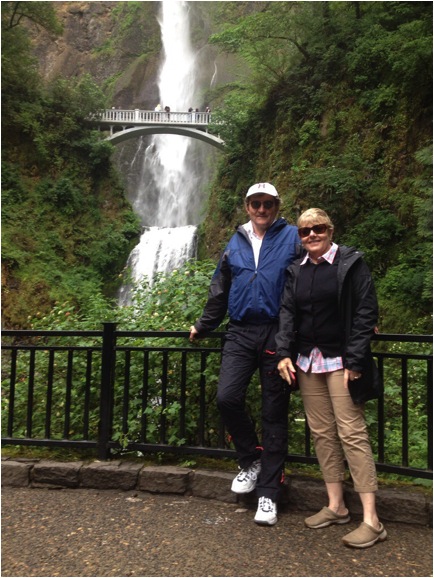 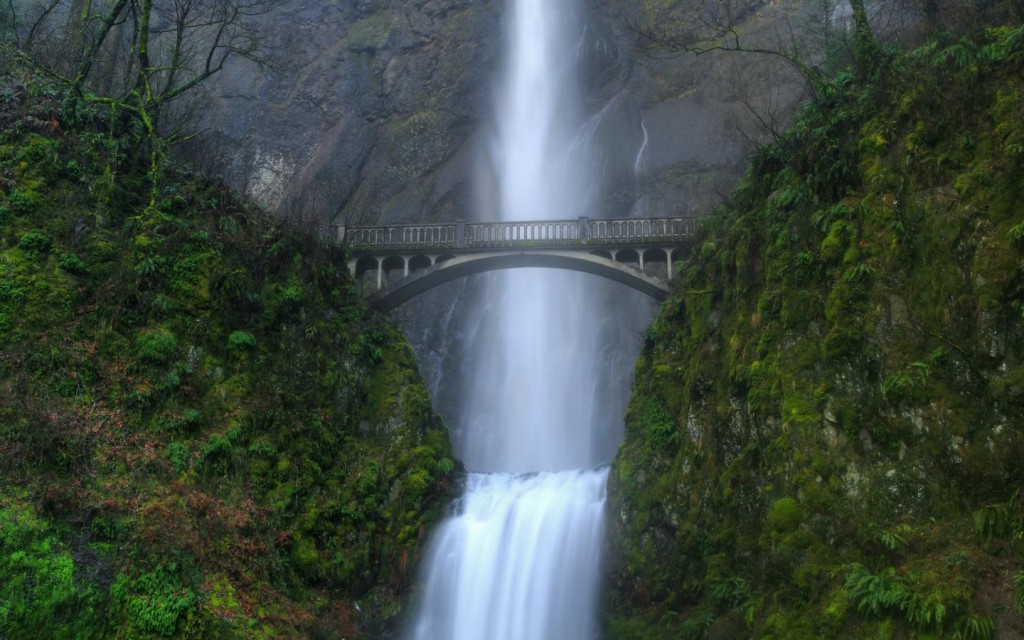 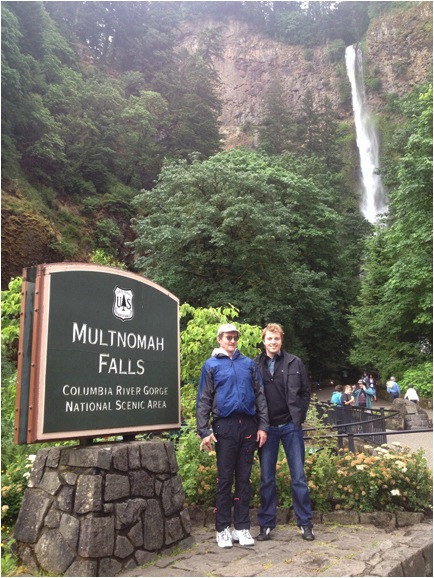 Bob and B.J. at Multnomah Falls 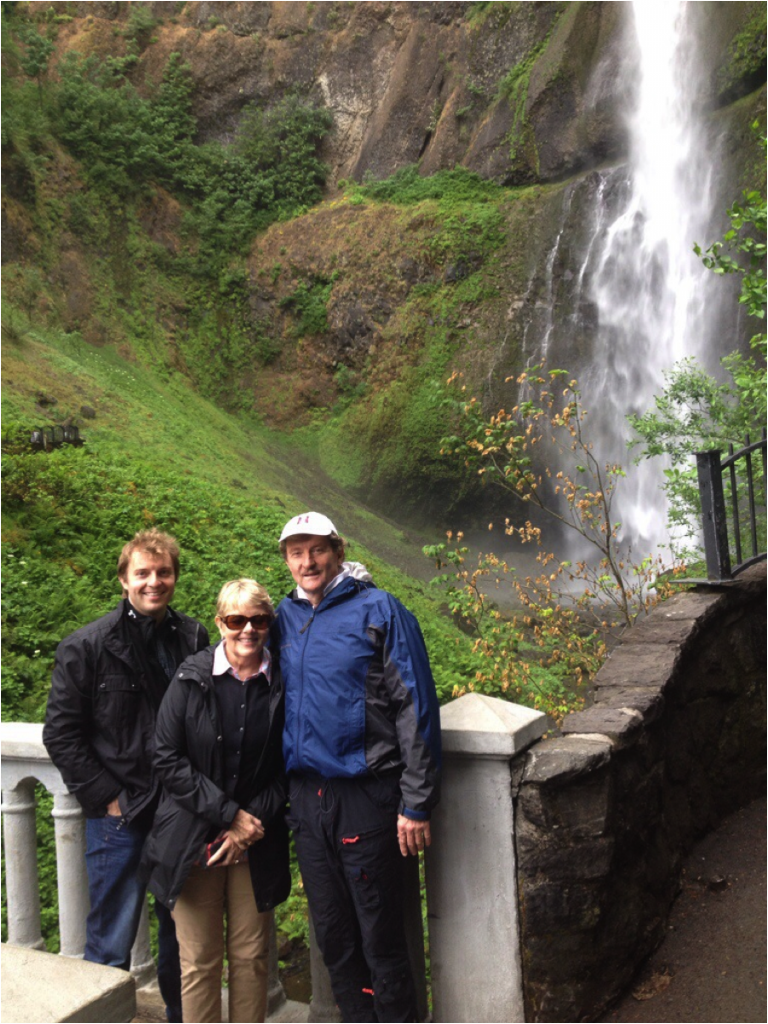 B.J., me and Bob Multnomah Falls 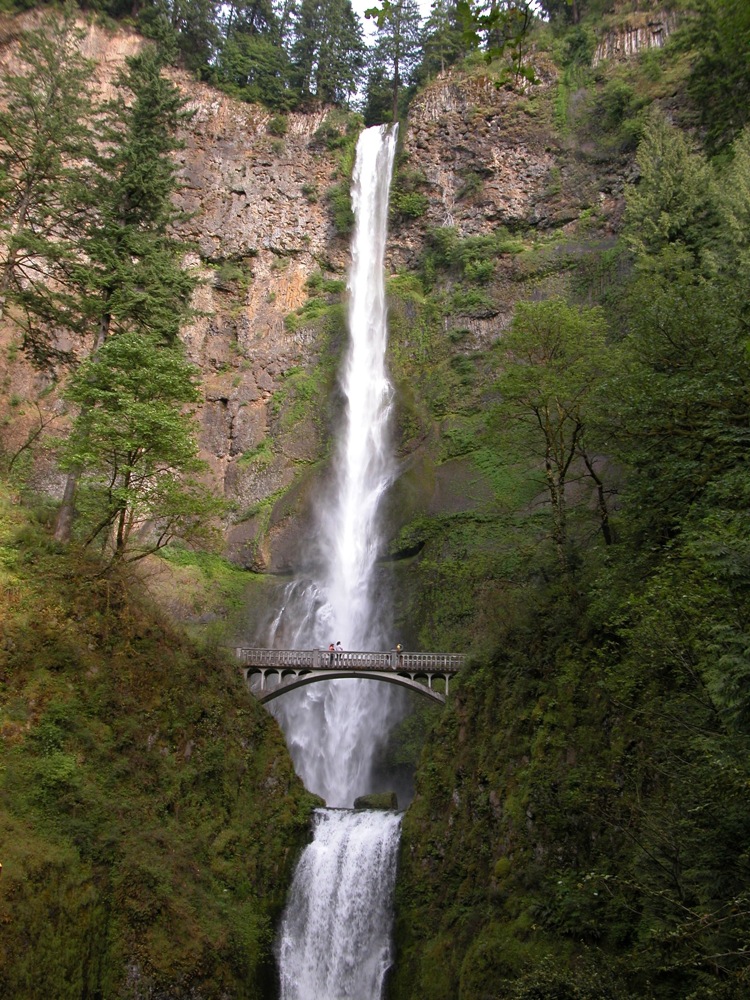 Multnomah Falls is a waterfall on the Oregon side of the Columbia River Gorge, located east of Troutdale, between Corbett and Dodson, along the Historic Columbia River Highway. The falls drops in two major steps, split into an upper falls of 542 feet (165 m) and a lower falls of 69 feet (21 m), with a gradual 9 foot (3 m) drop in elevation between the two, so the total height of the waterfall is conventionally given as 620 feet (189 m). Multnomah Falls is the tallest waterfall in the state of Oregon.

A foot trail leads to Benson Footbridge, a 45-foot (14 m)-long footbridge that allows visitors to cross 105 feet (32 m) above the lower cascade.

For more of spectacular Multnomah Falls (and surrounding area) check out this fun website: www.travelmeetshappy.com!

After the falls we visited Vista House

Samuel Lancaster, Assistant Highway Engineer for Multnomah County in 1913, supervised the Columbia River Highway project. Lancaster’s proposal to construct a building on the summit of Crown Point was another reflection of his desire to inspire the traveler along the highway and to make the wonders of the gorge accessible.

For more of spectacular Multnomah Falls here is a must see 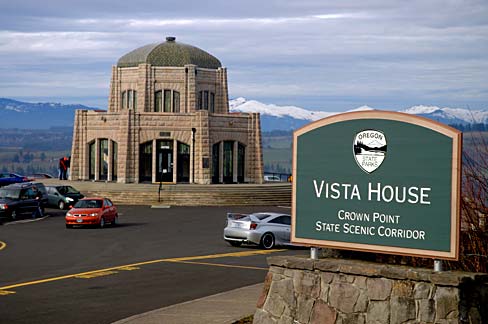 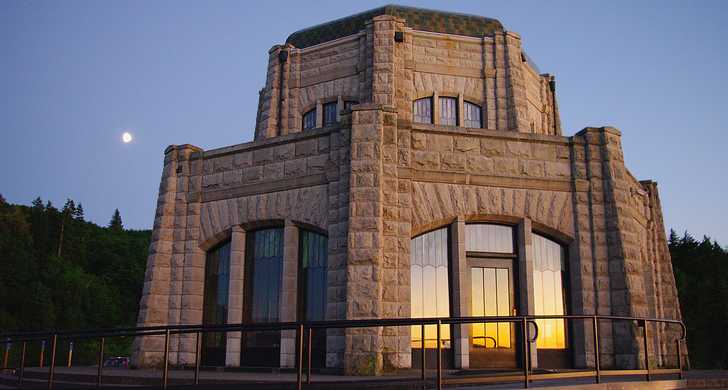 As Lancaster described it, the Crown Point promontory was the ideal site for “an observatory from which the view both up and down the Columbia could be viewed in silent communion with the infinite.”  Such an observatory would also be a fitting memorial to “the trials and hardships of those who had come into the Oregon country.” And it could “serve as a comfort station for the tourist and the travelers of America’s greatest highway.” He suggested it be known as the Vista House.

Vista House was built between 1916-1918 by Multnomah County as a comfort station and scenic wayside for those traveling on the Historic Columbia River Highway, which had been completed in 1913. It is also a memorial to Oregon pioneers. It was formally dedicated on May 5th, 1918.

The graceful octagonal stone structure towers 733 feet above the Columbia River, is listed on the National Register of Historic Places and in the National Geographic Society’s 2001 “Save America’s Treasures” book.

We also stopped at the Bonneville Fish Hatchery 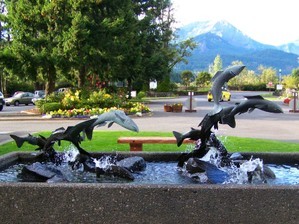 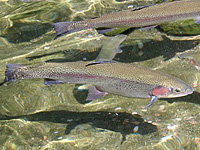 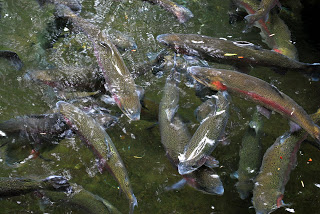 The hatchery raises 8 million Fall Chinook, 1.2 million Coho, 200 thousand Summer Steelhead, and 60 thousand Winter Steelhead. Adult salmon begin arriving at the hatchery in September and are then sorted through before spawning begins.

Spawning begins during the last week in October and continues until the beginning of December. As part of their natural life cycle all Pacific Northwest Salmon die after spawning.

The must see at the fish hatchery is Herman the Sturgeon 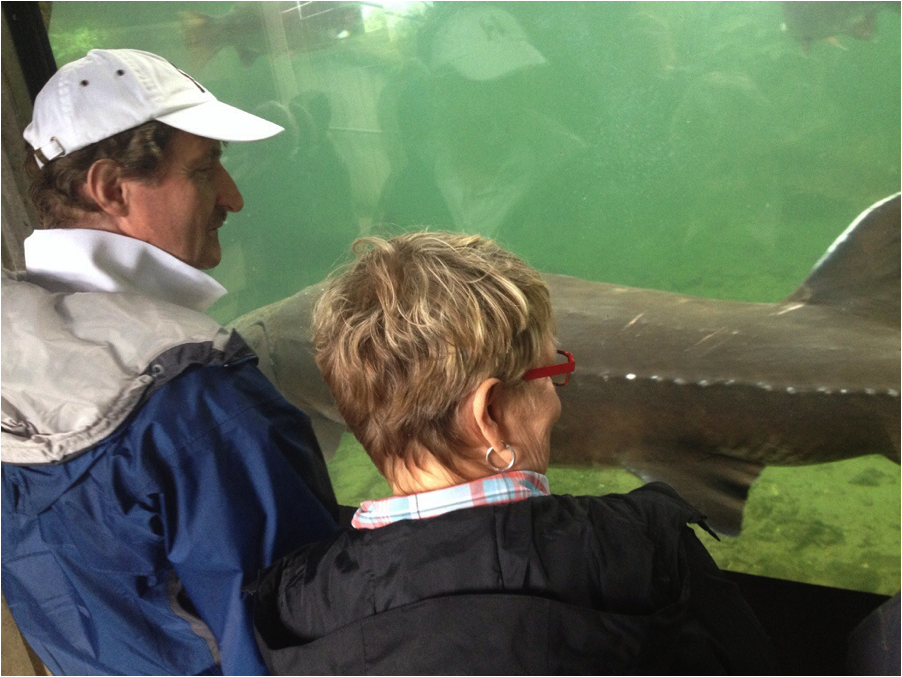 We are viewing Herman the Sturgeon Bonneville Fish Hatchery 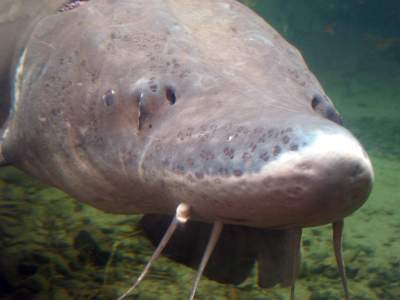 And then dinner at McMenamins 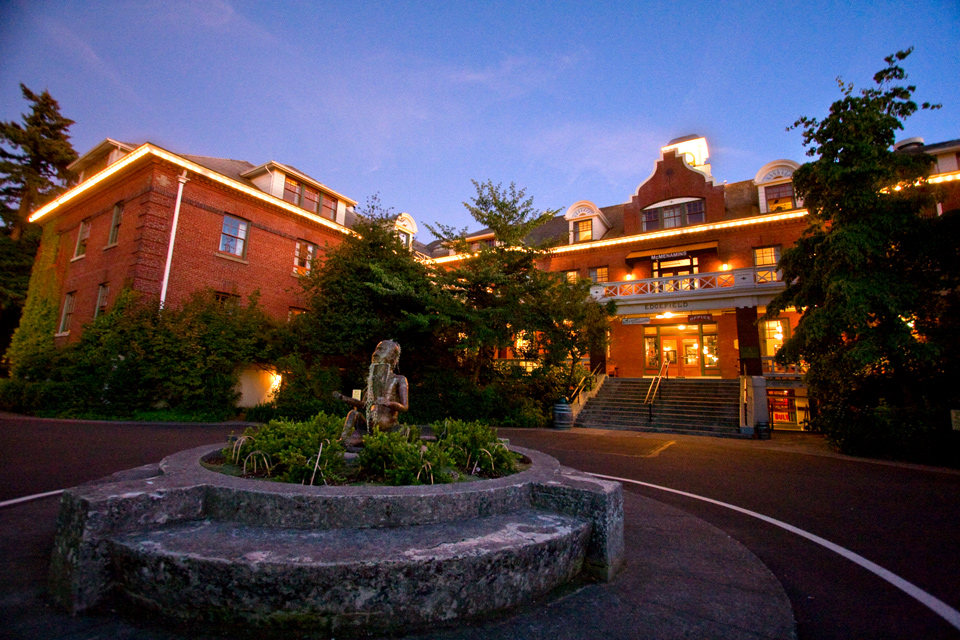 Encompassing a 74-acre parcel of farmland at the mouth of the spectacular Columbia River Gorge Scenic Area, Edgefield