Bob’s meeting this year was in Chicago.  Chicago is a fun, unique city with a great history.  One thing I had never done was the boat architectural river tour.  The AANS actually had a great film on Chicago’s architecture. Definitely worth watching.
Pictures from our boat tour: 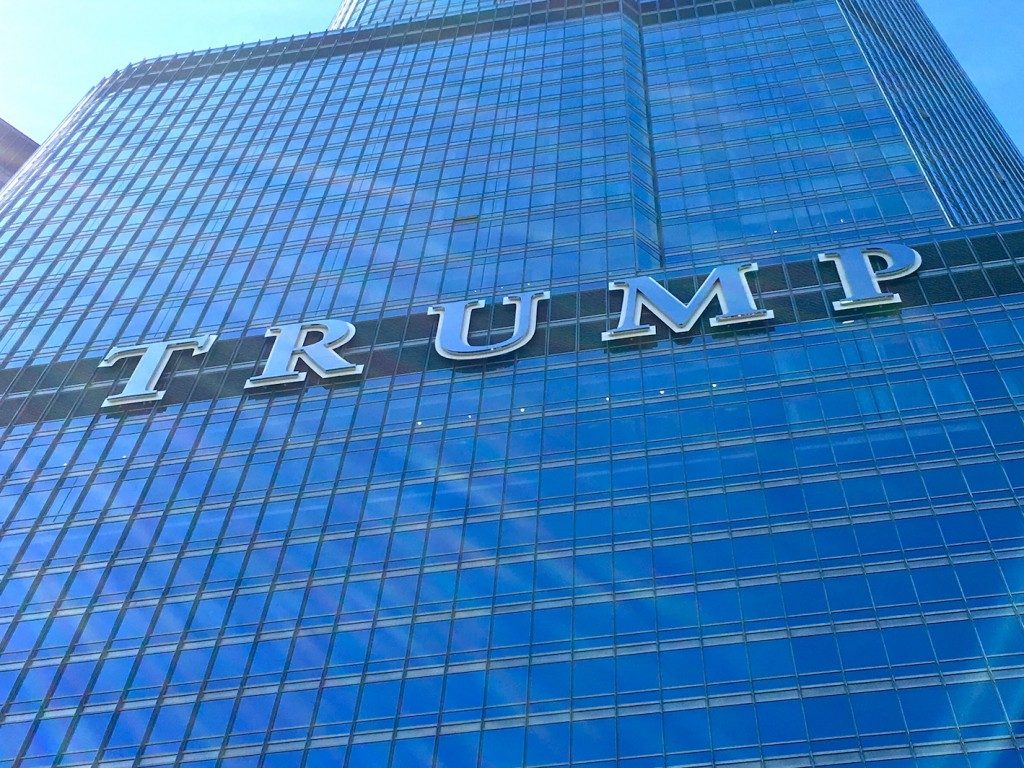 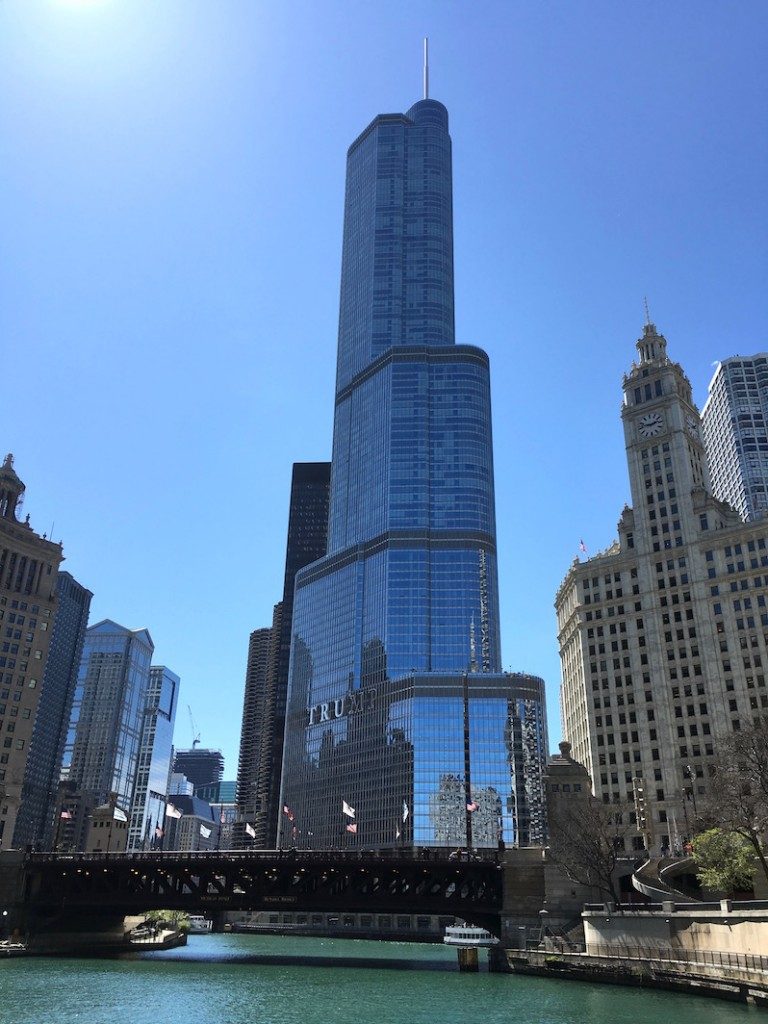 The Trump International Hotel and Tower, also known as Trump Tower Chicago and Trump Tower, is a skyscraper condo-hotel in downtown Chicago, Illinois. The building, named after real estate developer Donald Trump, was designed by architect Adrian Smith of Skidmore, Owings and Merrill. Bovis Lend Lease built the 98-story structure, which reaches a height of 1,389 feet (423 m) including its spire, its roof topping out at 1,170 feet (360 m). It is next to the main branch of the Chicago River, with a view of the entry to Lake Michiganbeyond a series of bridges over the river. 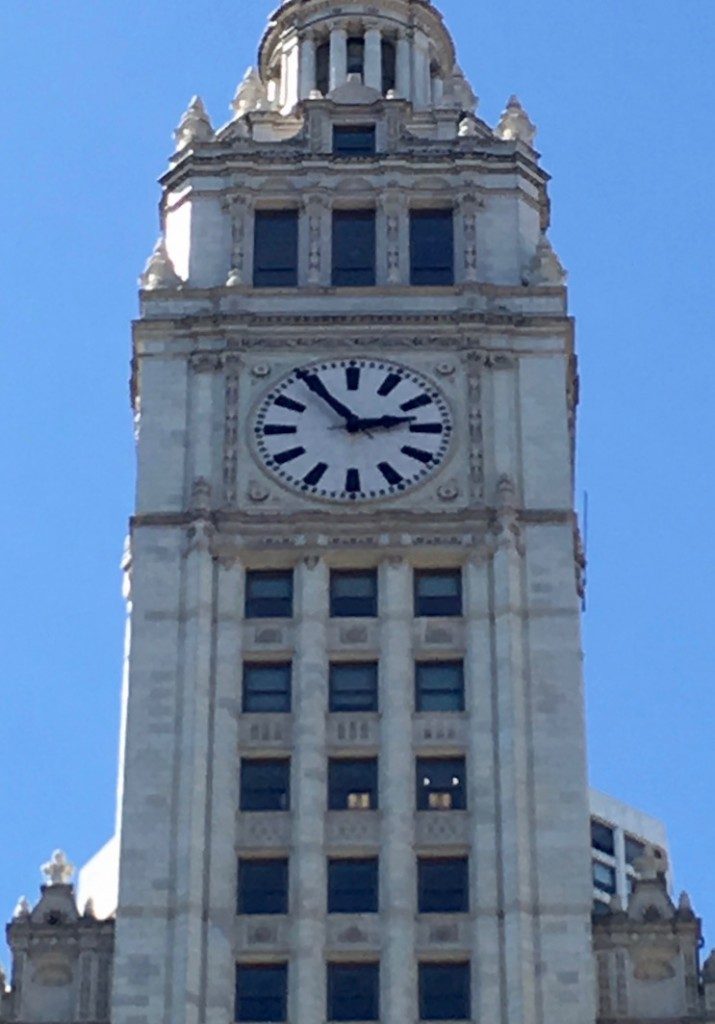 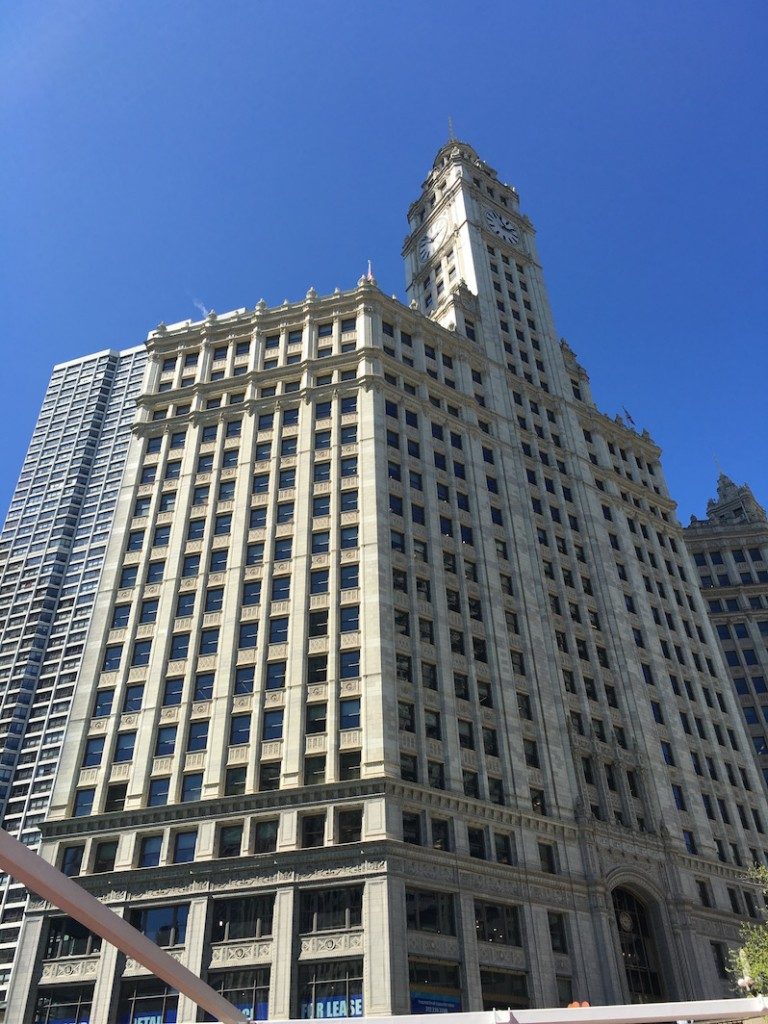 When ground was broken for the Wrigley Building in 1920, there were no major office buildings north of the Chicago River and the Michigan Avenue Bridge, which spans the river just south of the building, was still under construction. The land was selected by chewing gum magnate William Wrigley Jr. for the headquarters of his company. The building was designed by the architectural firm of Graham, Anderson, Probst & White using the shape of the Giralda tower of Seville’s Cathedral combined with French Renaissance details. The 425-foot (130 m) south tower was completed in April 1921 and the north tower in May 1924. Walkways between the towers were added at the ground level and the third floor. In 1931, another walkway was added at the fourteenth floor to connect to offices of a bank in accordance with a Chicago statute concerning bank branch offices. The two towers, not including the levels below Michigan Avenue, have a combined area of 453,433 square feet (42,125.3 m2).

The two towers are of differing heights, with the south tower rising to 30 stories and the north tower to 21 stories. On the south tower is a clock with faces pointing in all directions. Each face is 19 feet 7 inches (5.97 m) in diameter. The building is clad in glazed terra-cotta, which provides its gleaming white façade. On occasion, the entire building is hand washed to preserve the terra cotta. At night, the building is brightly lit with floodlights. 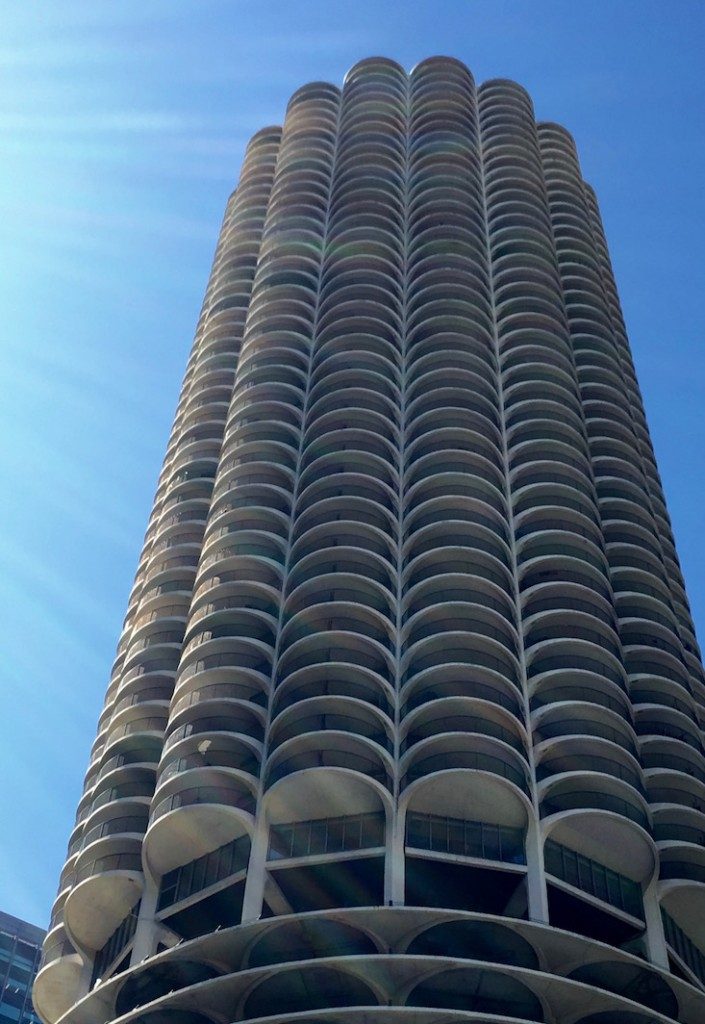 Marina City is a mixed-use residential/commercial building complex that occupies an entire city block on State Street in Chicago, Illinois. It sits on the north bank of the Chicago River in downtown Chicago, directly across from the Loop district. The complex consists of two corncob-shaped, 587-foot (179 m), 65-story towers, which include five-story elevators and physical plant penthouses. 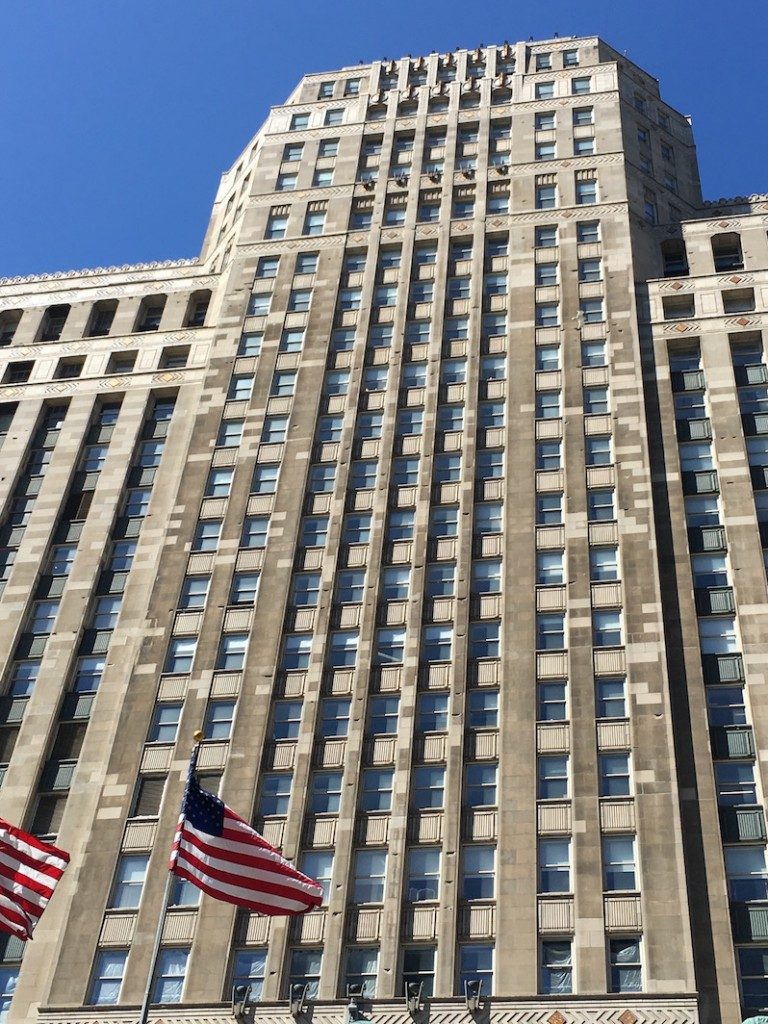 The Tribune Tower is a neo-Gothic structure located at 435 North Michigan Avenue in Chicago, Illinois, United States. It is the home of the Chicago Tribune, Tribune Media, and tronc, Inc., formerly known as Tribune Publishing. WGN Radio (720 kHz) broadcasts from the building, while the ground level houses the large restaurant Howells & Hood (named for the building’s architects), whose patio overlooks nearby Pioneer Court and Michigan Avenue. CNN‘s Chicago bureau is located in the building. It is listed as a Chicago Landmark and is a contributing property to the Michigan–Wacker Historic District. 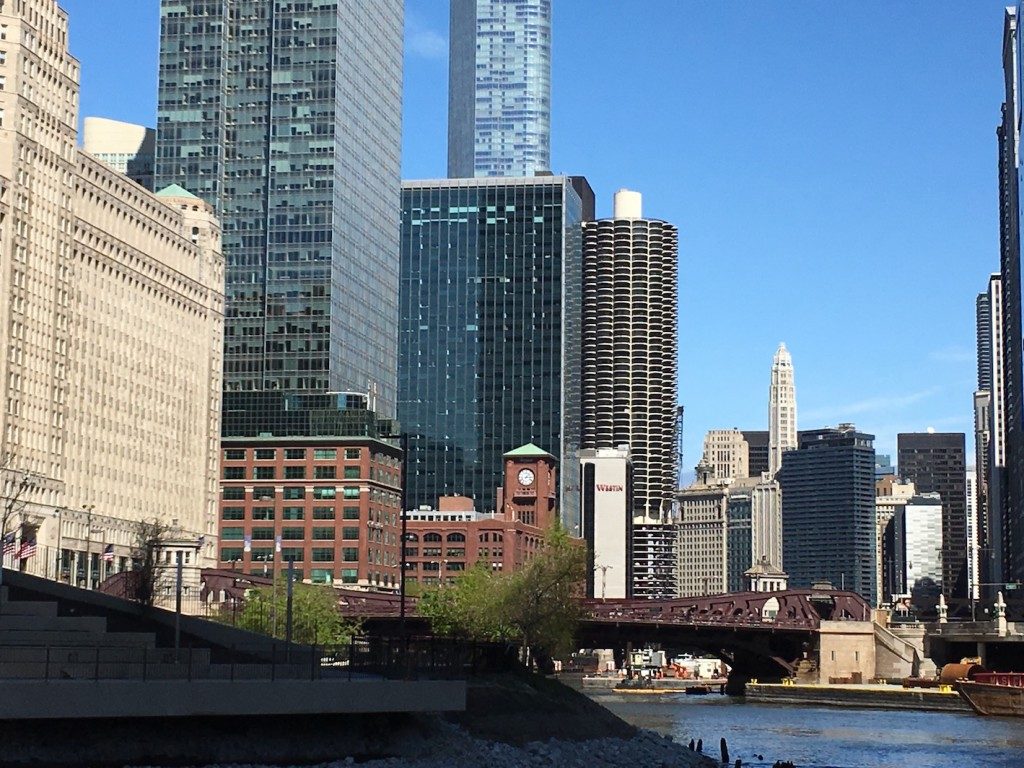 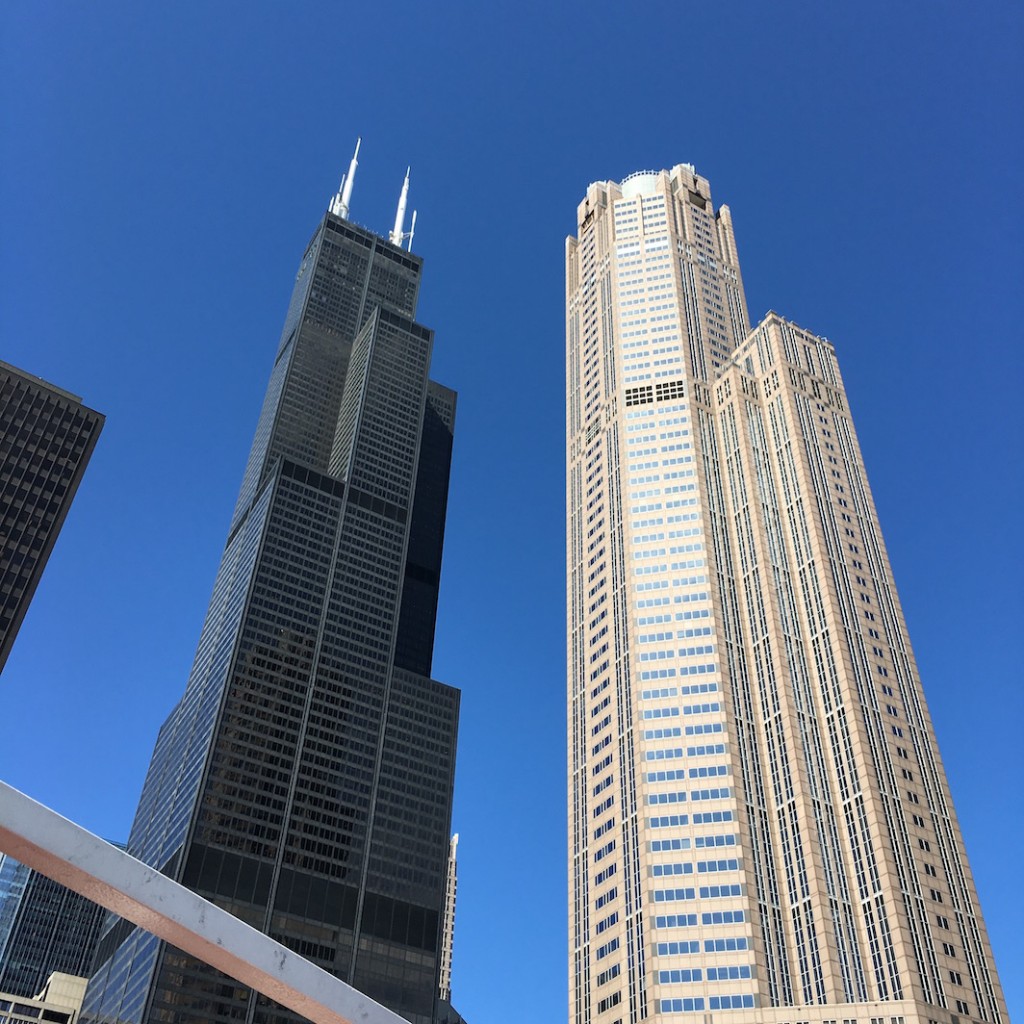 The Willis Tower, built and still commonly referred to as Sears Tower, is a 108-story, 1,451-foot (442 m) skyscraper in Chicago, Illinois, United States.   At completion in 1973, it surpassed the World Trade Center towers in New York to become the tallest building in the world, a title it held for nearly 25 years. The Willis Tower is the second-tallest building in the United States and the 14th-tallest in the world. 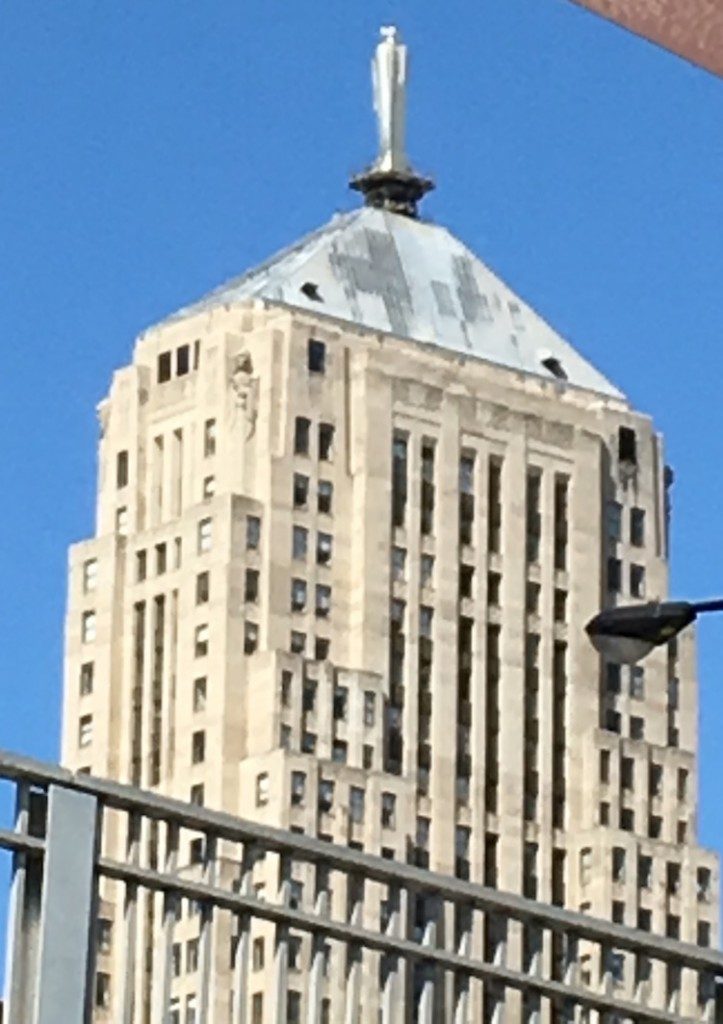 Chicago Board of Trade

Built in 1930 and first designated a Chicago Landmark on May 4, 1977,  the building was listed as a National Historic Landmark on June 2, 1978.  It was added to the National Register of Historic Placeson June 16, 1978. The current structure is known for its art deco architecture, sculptures and large-scale stone carving, as well as large trading floors. An aluminum, three-story art deco statue of Ceres, goddess of agriculture (particularly grain), caps the building. 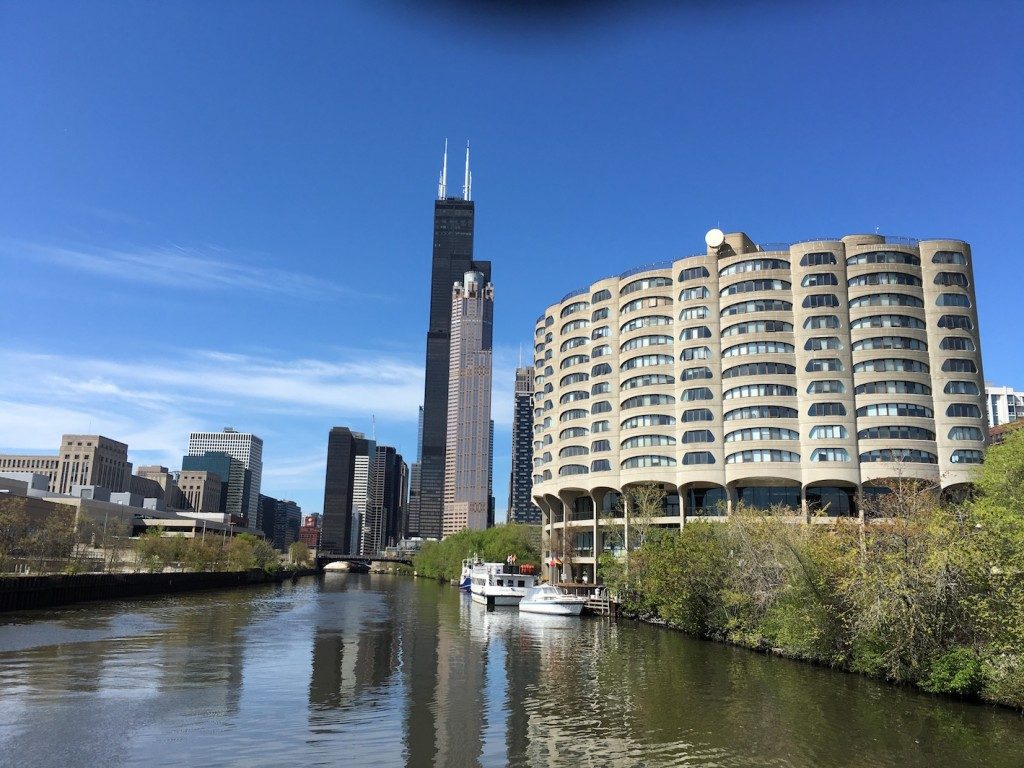 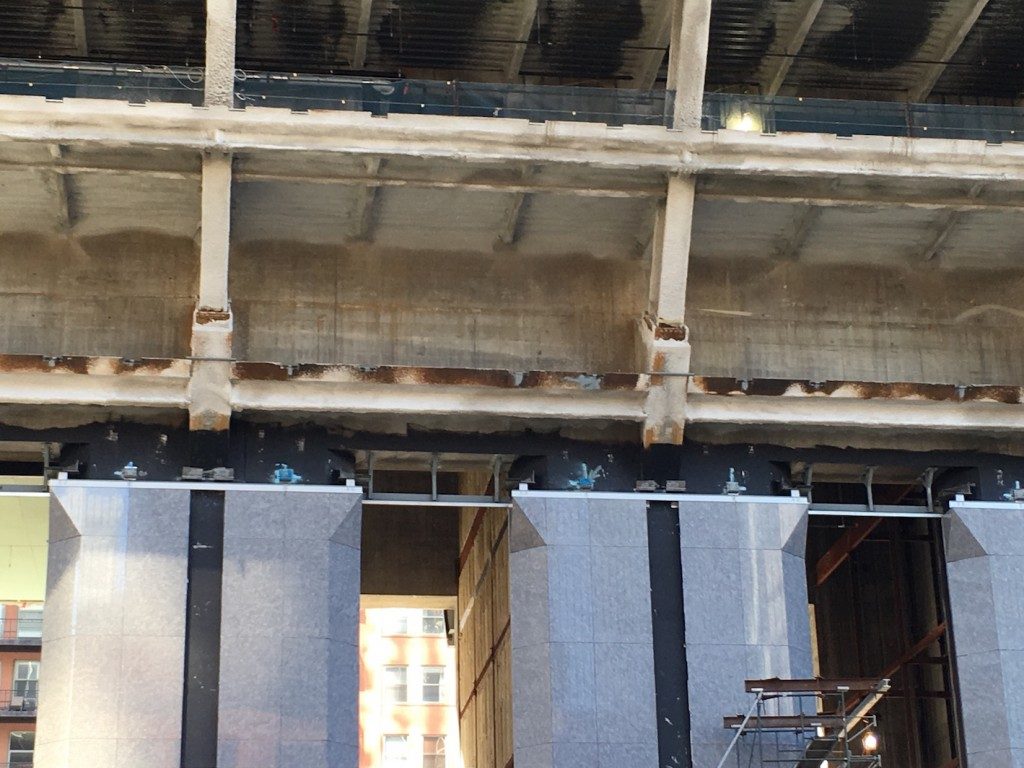 building going up under bridges in Chicago 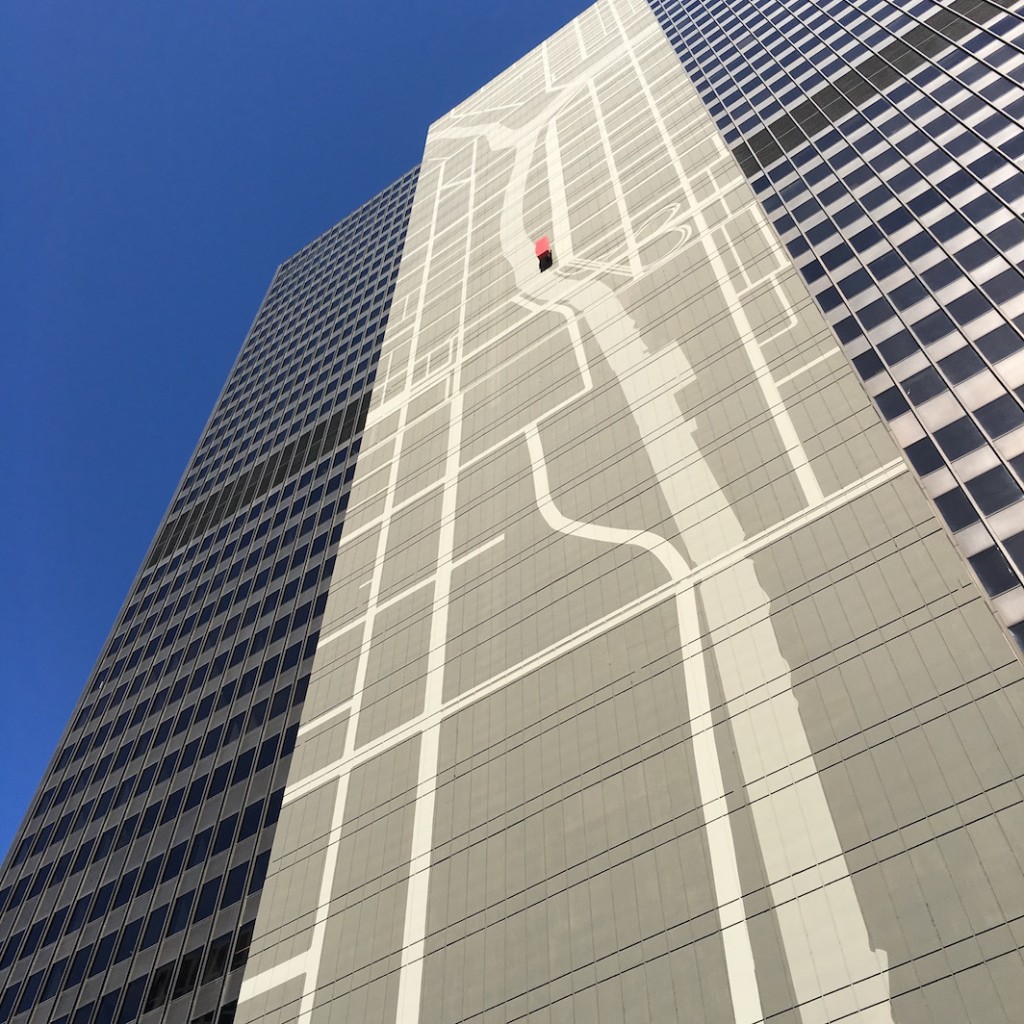 The 300 South Wacker building’s giant mural features a map of the Chicago River and surrounding streets.

The mural map, a vertical sliver more than 400 feet tall, portrays the bending river, the crisscrossing street grid and (naturally) 300 S. Wacker. It’s the star of the map, represented by bright red rectangle that looks like a flat-roofed version of a Monopoly hotel. At night, the rectangle is lit from within by LED lights. 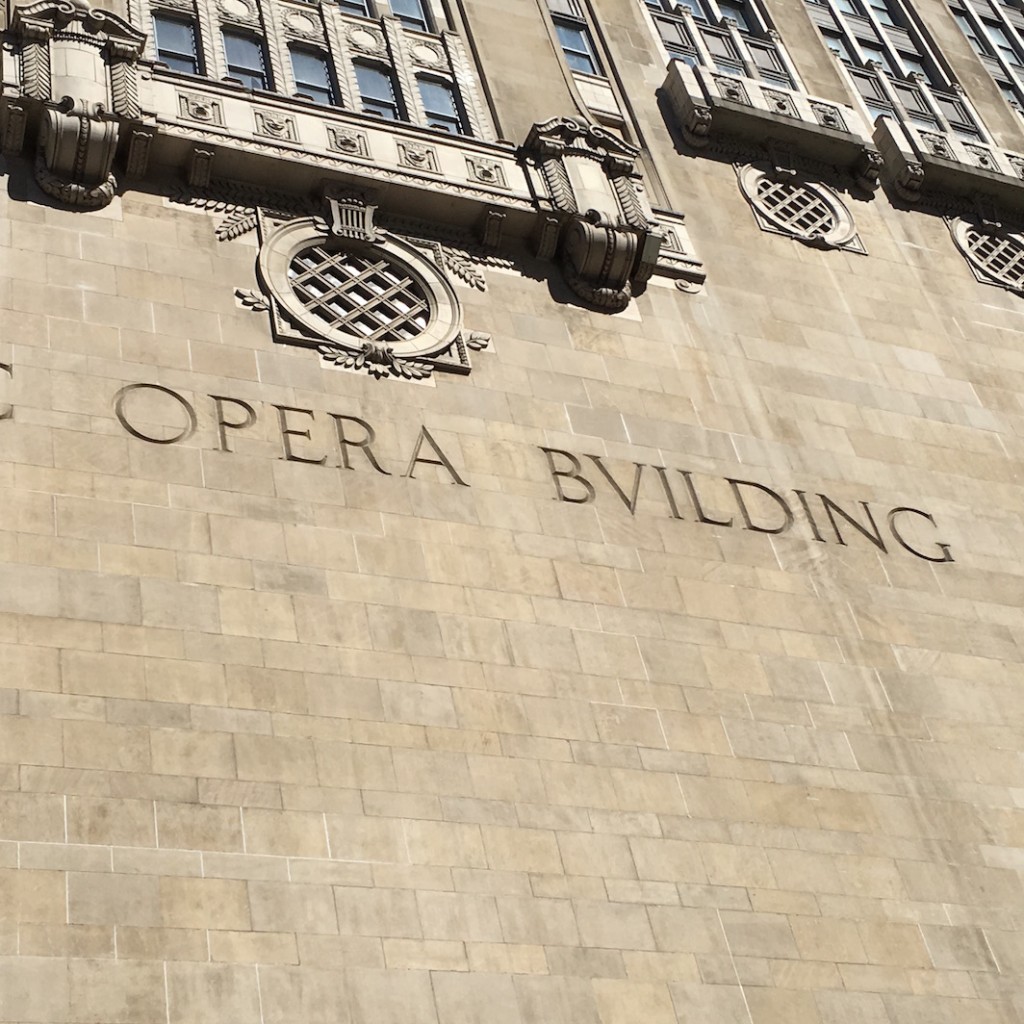 Civic Opera Building.  It’s sometimes referred to as “Insull’s Throne” … It has been rumored that Insull designed the building in the shape of a throne upon which his daughter could figuratively sit as star of the opera. Having been rejected by the New York Metropolitan Opera, she could sit with her back facing eastward toward New York City. 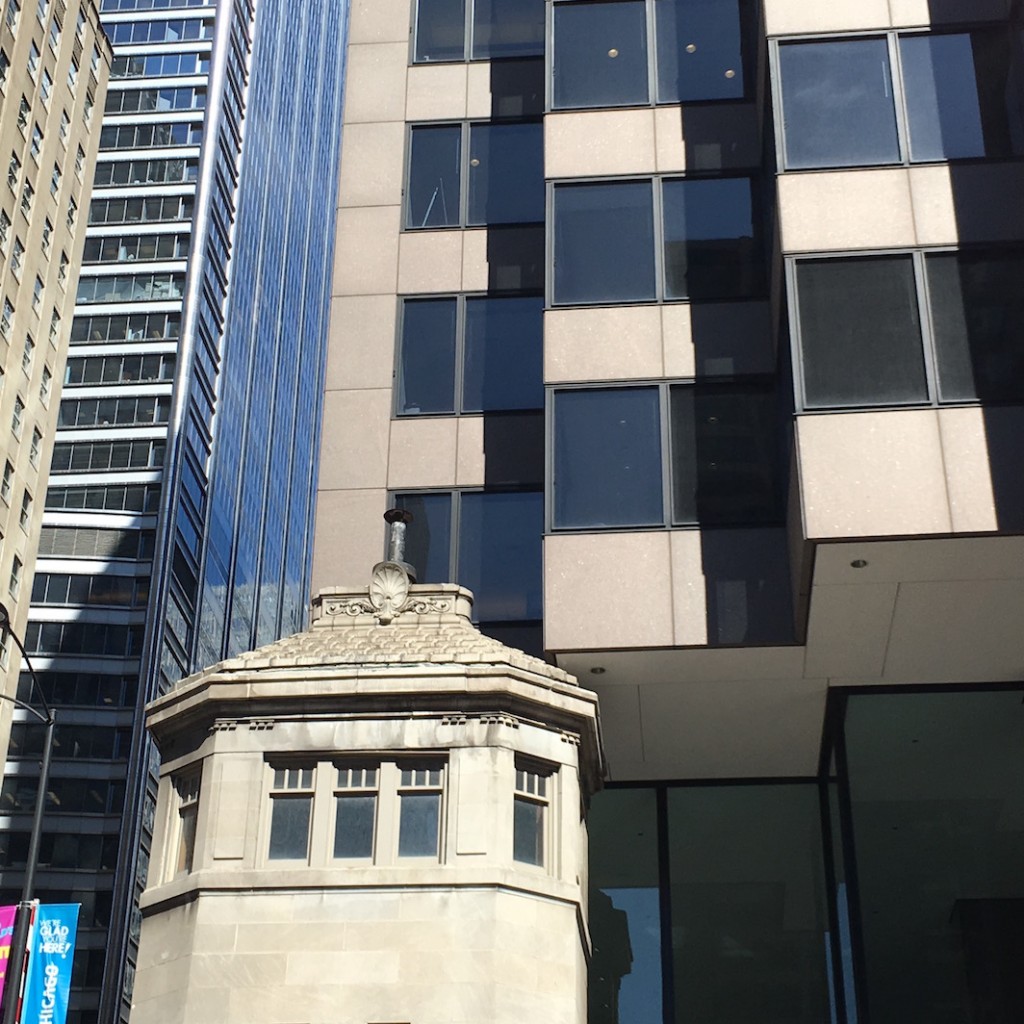 Chicago River’s bridge tender houses, the attention paid to these functional buildings are truly what sets Chicago apart and conveys the architectural fervor of which the city is so proud…no two are alike. 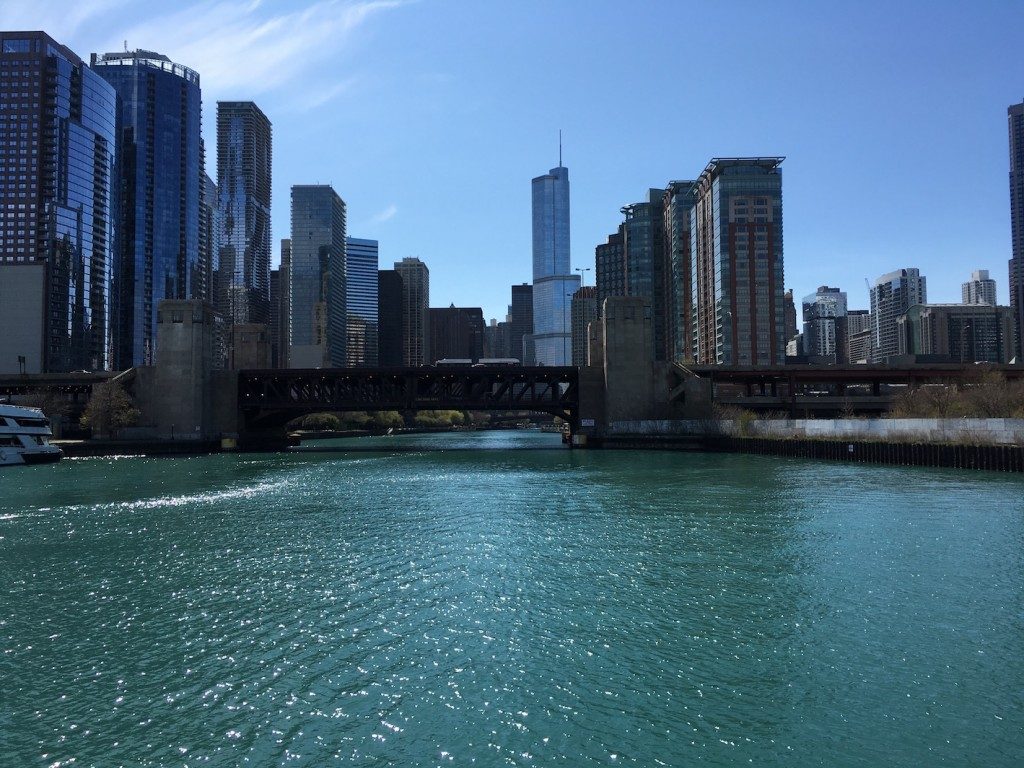 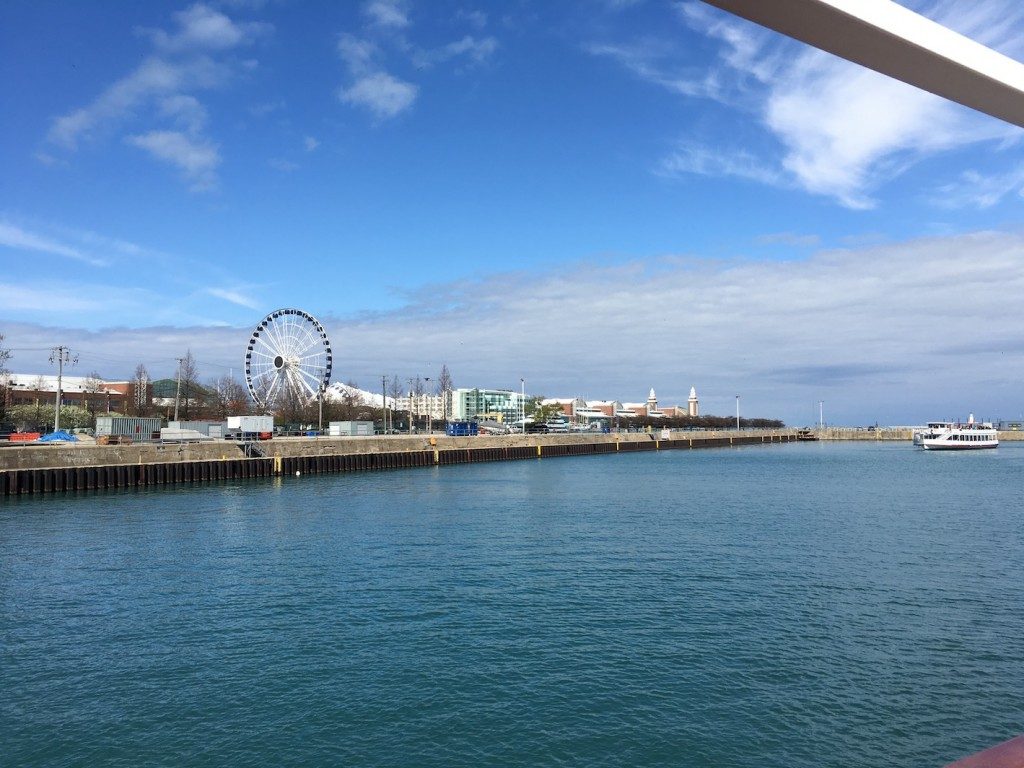 Navy Pier is a 3,300-foot-long (1,010 m) pier on the Chicago shoreline of Lake Michigan. It is located in the Streeterville neighborhood of the Near North Side community area. The Navy Pier currently encompasses more than fifty acres of parks, gardens, shops, restaurants, family attractions and exhibition facilities and is the top leisure destination in the Midwest, drawing nearly nine million visitors annually.   It is one of the most visited attractions in the entire Midwestern United States and is Chicago’s number one tourist attraction.