I recently got to visit my daughter and son-in-law in Richmond Virginia.  We actually went to Baltimore to a trade show.  We went to the American Craft Council  Wholesale Show at the Baltimore Convention Center.  We decided to check it out for Becca’s company Max and Bunny. 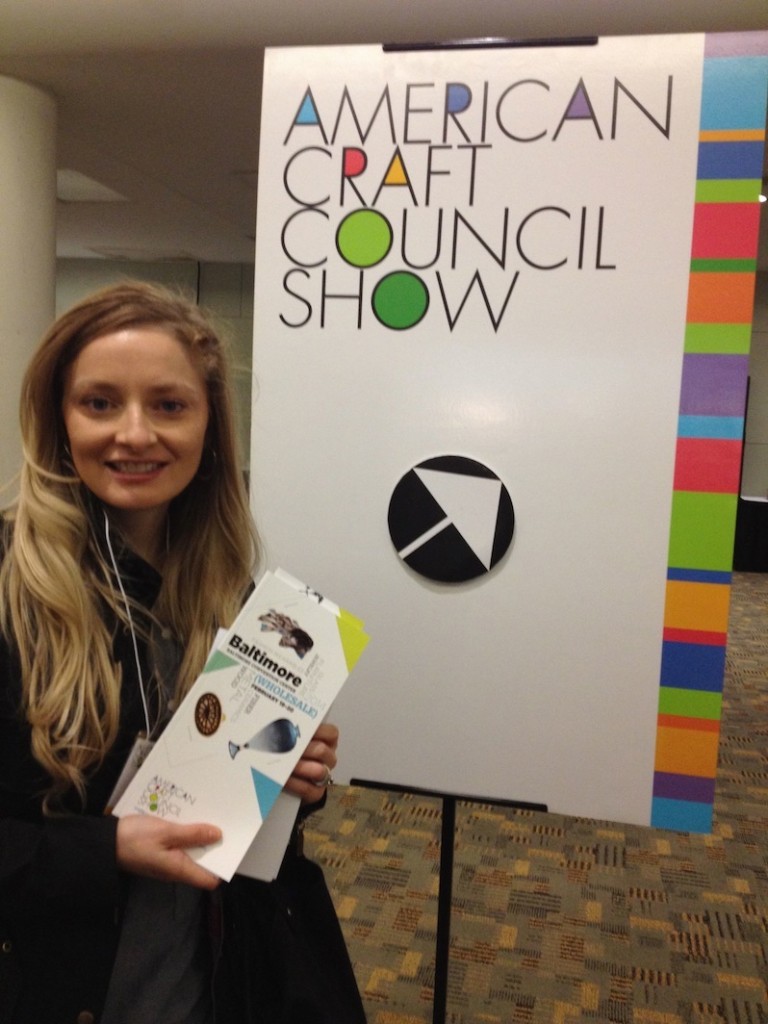 I thought it was a spectacular show.  The only problem I had injured my foot (later learned I had a stress fracture)  but I hobbled around on my broken foot and checked out the show.  They have both a wholesale and retail show (back to back).  It’s a three-day celebration of all things handmade! More than 650 of the top contemporary jewelry, clothing, furniture, and home décor artists from across the country gather under one roof. It is a chance to touch, feel, and explore high-quality American craft like you’ve never seen before! This is the American Craft Council’s flagship show – a must-attend for craft lovers.  Definitely worth attending. 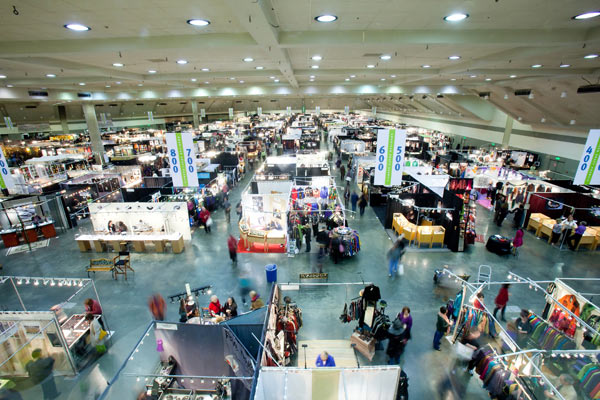 After we got back to Richmond I wanted to see the sights, but with my injured foot we did most our sight seeing from the car.  One stop was the Hollywood Cemetery. 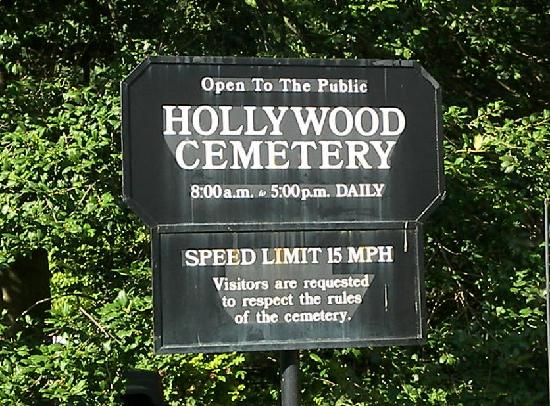 Natives of Richmond Virginia consider Hollywood Cemetery much more than a Cemetery.  Hollywood is a living story in stone, iron, and landscape.  It recalls Virginians of bygone years whose lives shaped and influenced history.  With stunning views, Hollywood overlooks the James River, near the site where Captain Christopher Newport planted a wooden cross a few weeks after the founding of Jamestown. 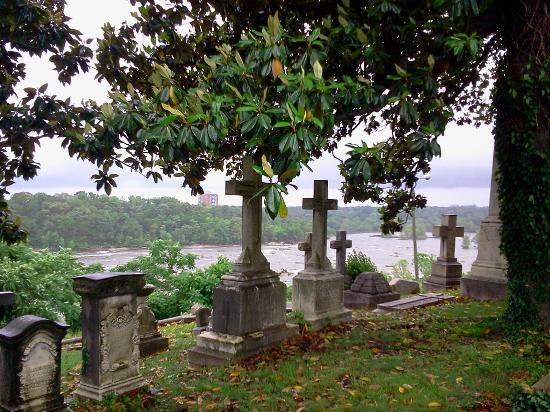 The cemetery was designed in 1847 by noted architect, John Notman of philadelphia. It was designed in the “rural” style to escape grid-like monotony of older cemeteries.  It is one of America’s most beautiful “garden” cemeteries. Hollywood’s paths wind through 135 acres of valleys, over hills, and beneath stately trees of natural  beauty and tranquility. 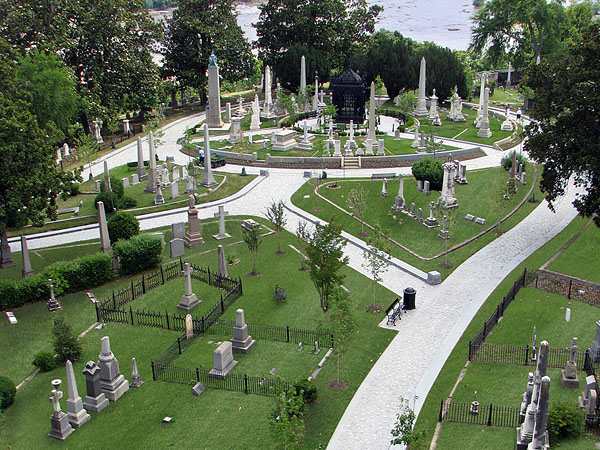 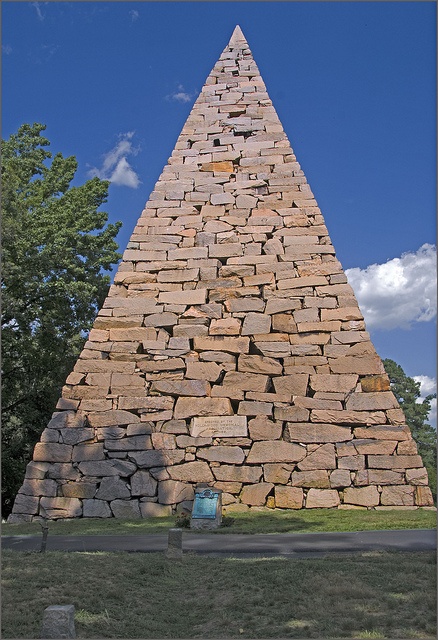 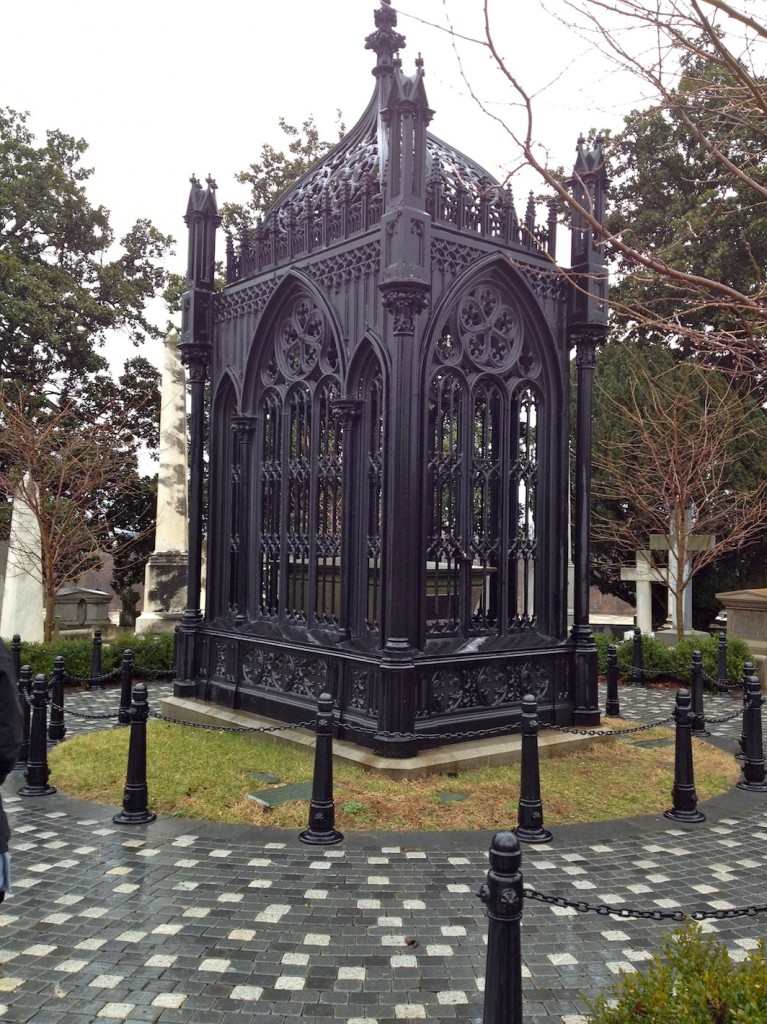 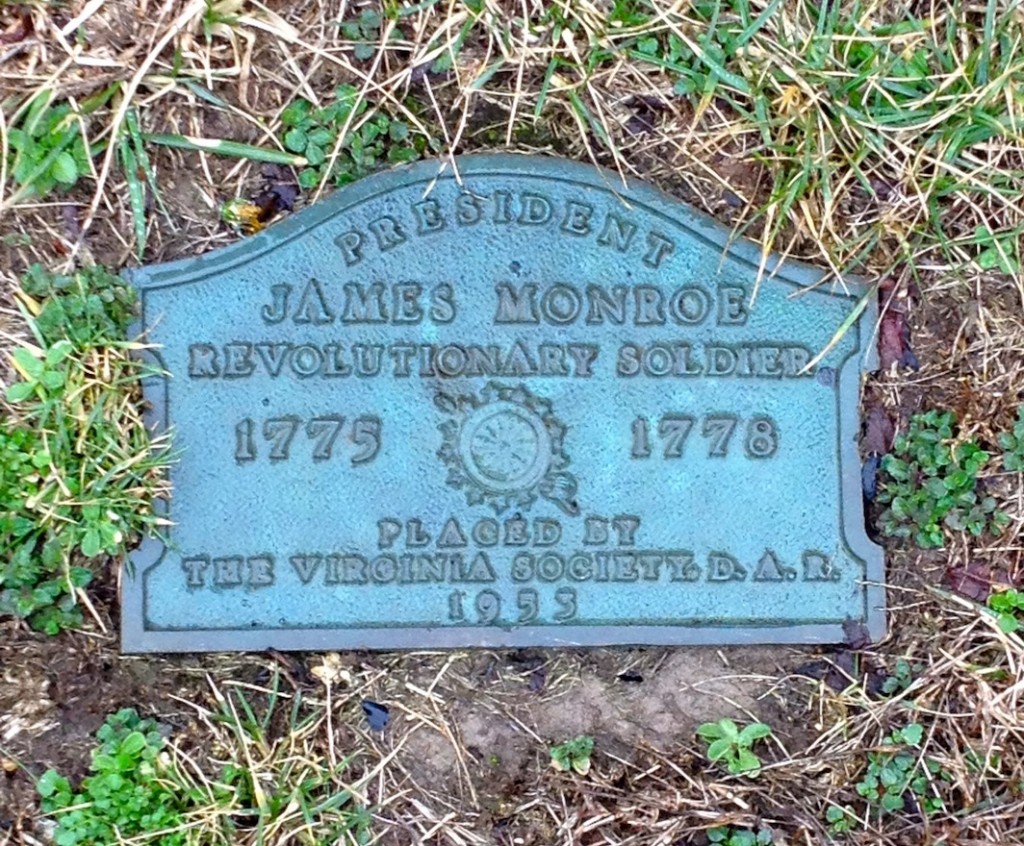 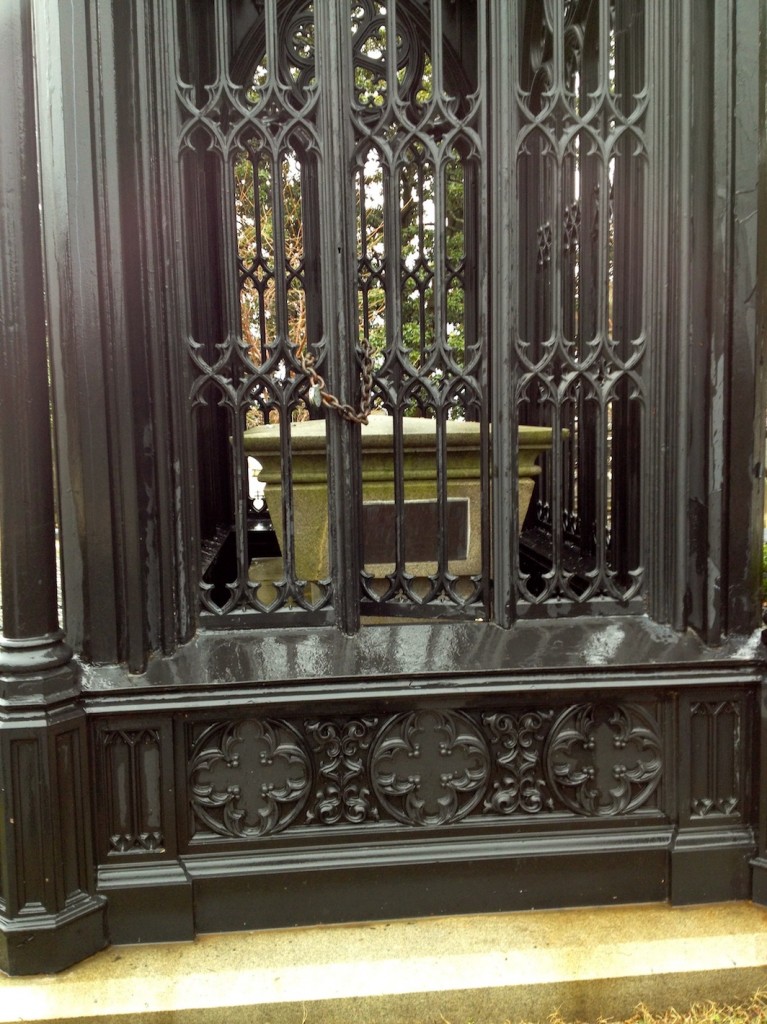 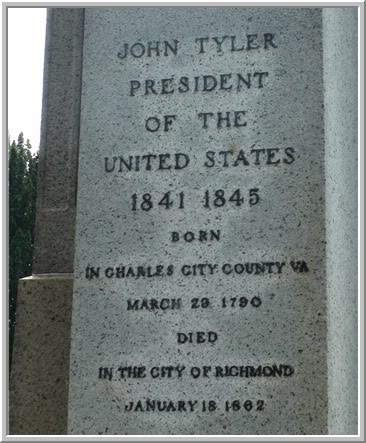 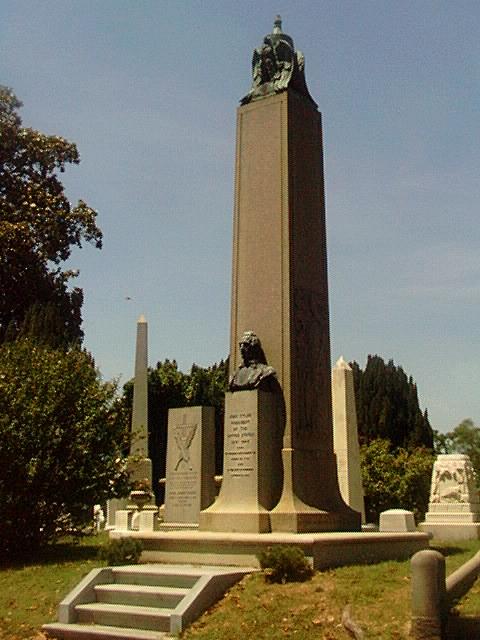 You cannot miss Black Dog Hill with one of Richmond’s sweetest stories (urban legend ?).  No matter it is one of the best liked and well-known monuments in the area.  It  is the cast-iron Newfoundland standing guard over a grave. Iron Dog is by far more famous as a curiosity than for the person buried there. In fact, there are many versions of the Iron Dog story, and the Valentine Richmond History Center helped to identify several. 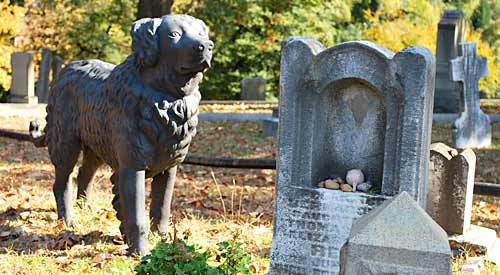 What is fairly certain is that a female toddler is buried there, last name Rees. I’ve seen at least three first names — Florence, Elizabeth and Bernadine, with the latter being the most likely. She apparently died of a childhood disease (maybe scarlet fever) in 1862 before she reached the age of 3.

A fine article by Walter S. Griggs Jr. in the Summer 2006 Richmond Guide has three versions of how Iron Dog got to the area he notes became known as “Black Dog Hill”: 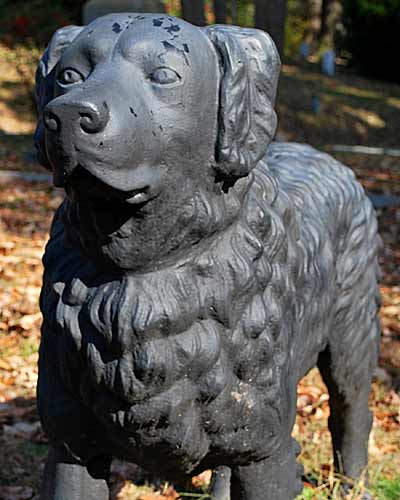 No matter which version you want to believe, the lore of the story is what people seem to love most. Trinkets, toys, coins and flowers are often said to be found at the grave and on the black Iron Dog, as if we all have some relation to the little girl and her famous guardian.
Another historic site we visited was Virginia House in Richmond. 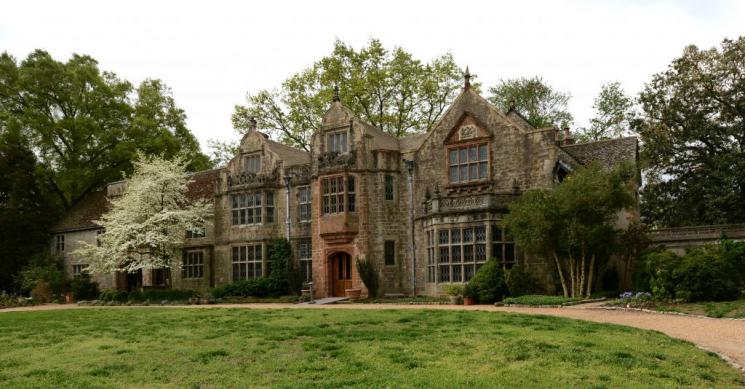 Virginia House was formerly an English manor house that was relocated to Richmond in 1925. The home is now owned and operated by the Virginia Historical Society. 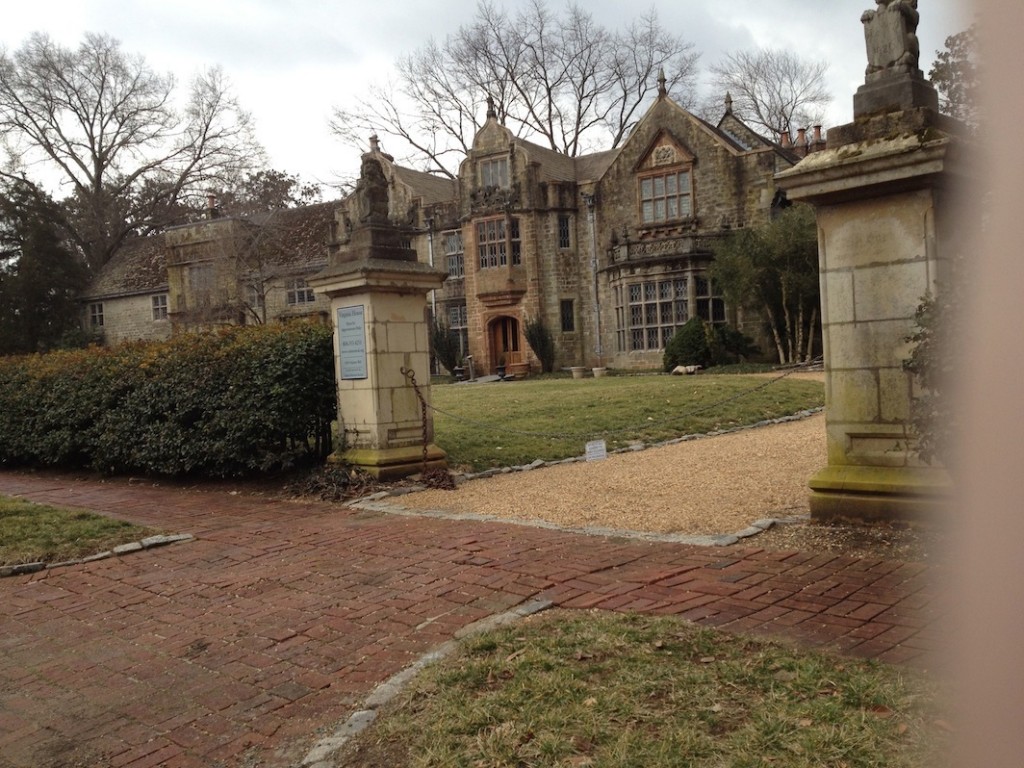 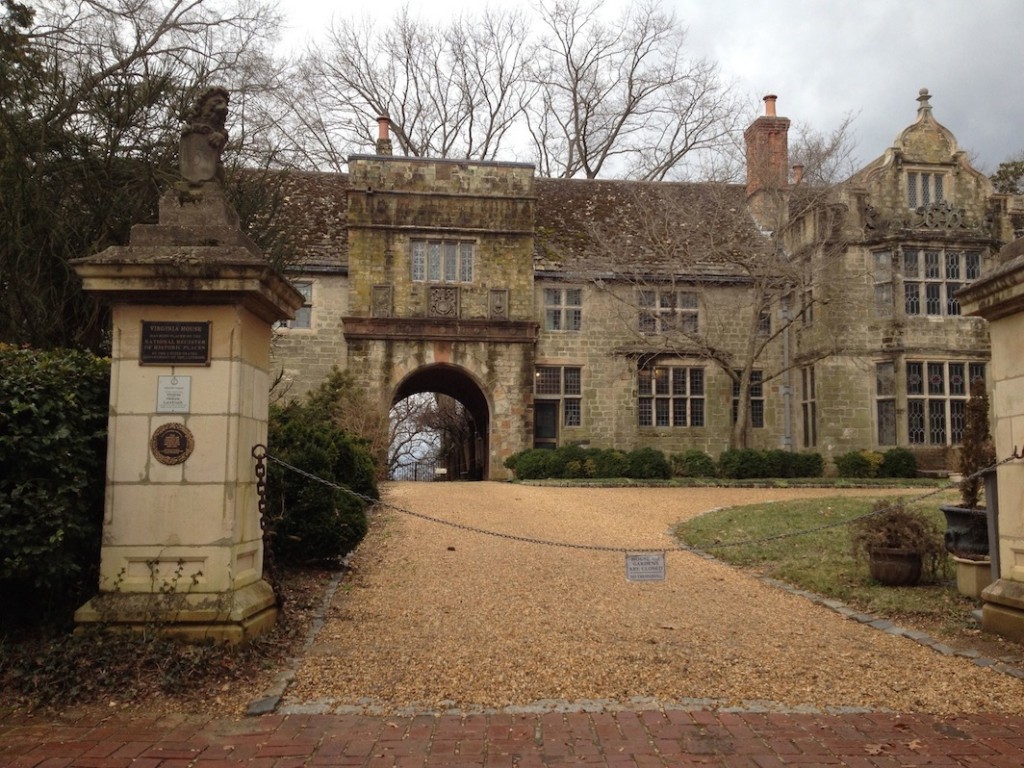 Virginia House was completed a few months before the stock market crash of 1929. Designed by Alexander and Virginia Weddell, the home is situated on a hillside overlooking the historic James River and was constructed from the materials of a sixteenth century English manor house.

I loved the wavy walls 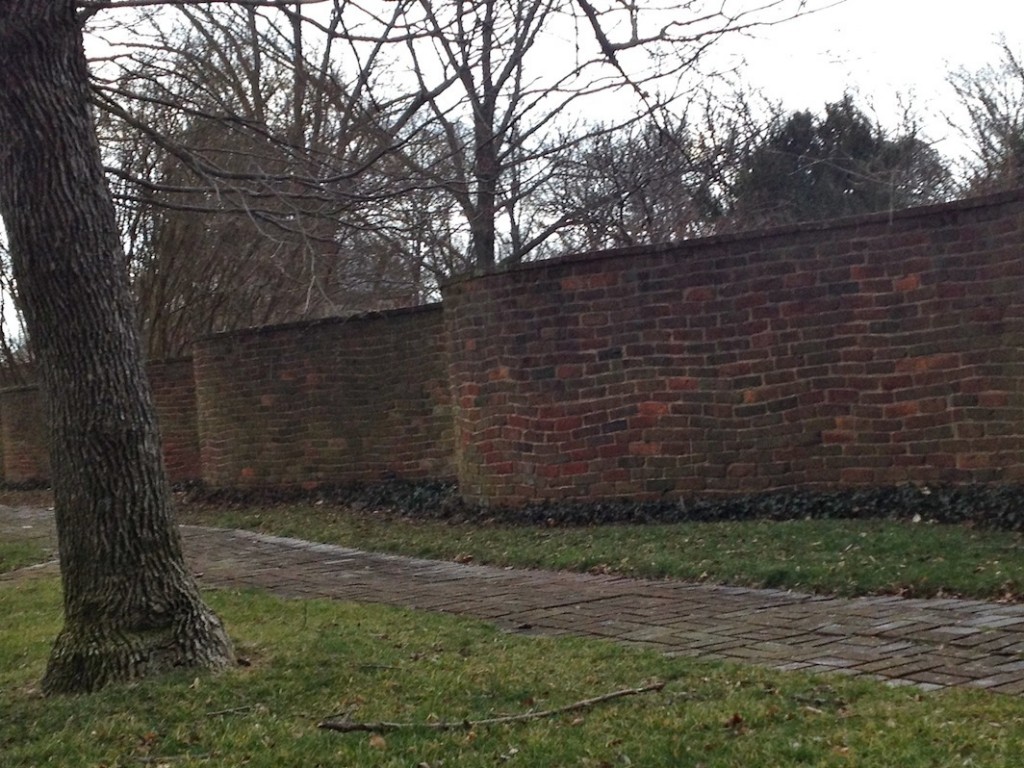 n the rolling banks of the James River stands a remarkable Tudor estate. And by Tudor, we’re not simply referring to an architectural style. This manor house was actually built in Lancashire, England in the late 15th Century.
For hundreds of years, Agecroft Hall was the distinguished home of England’s Langley and Dauntesey families. At the end of the 19th century, however, Agecroft fell into disrepair, and in 1925 it was sold at auction.
Hearing of this tremendous opportunity, Richmonder Thomas C. Williams, Jr. purchased the structure, and had it dismantled, crated, and shipped across the Atlantic, and then painstakingly reassembled in a Richmond neighborhood known as Windsor Farms.
Today, Agecroft Hall stands beautifully re-created, in a setting reminiscent of its original site on Lancashire’s Irwell River. 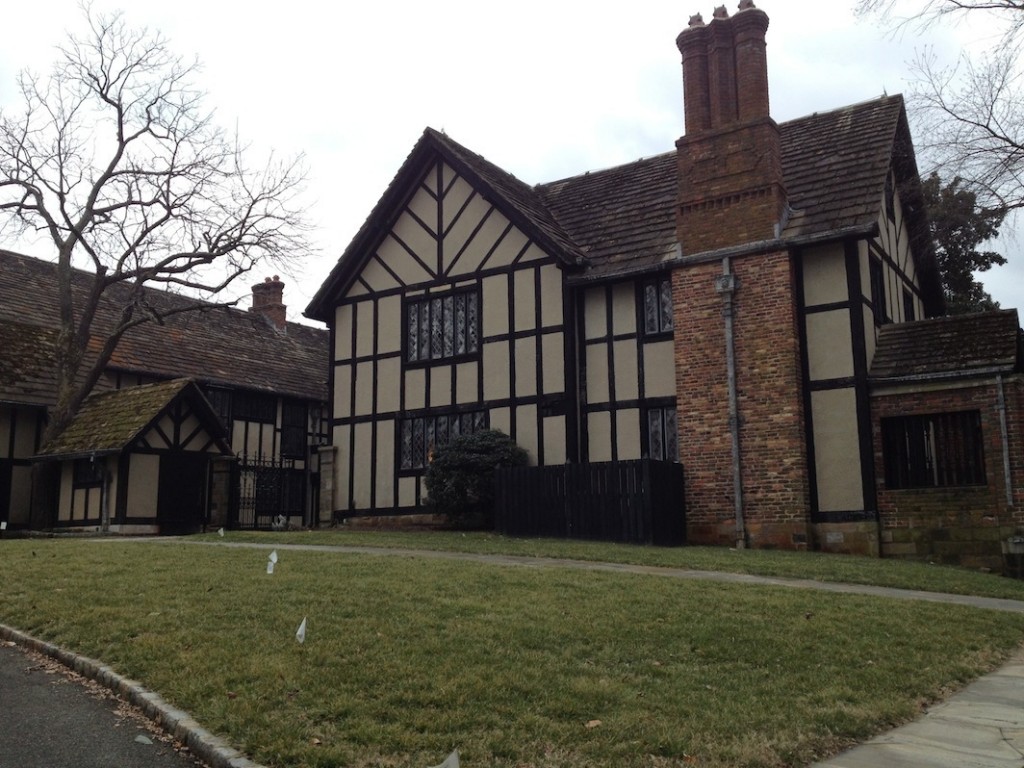 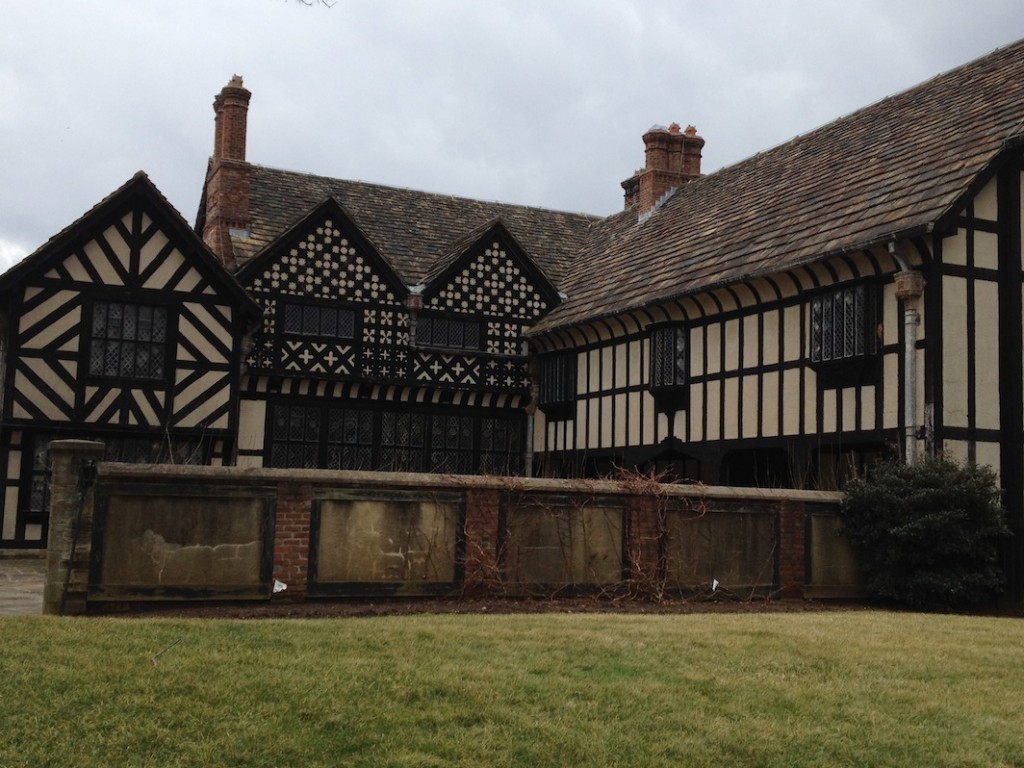 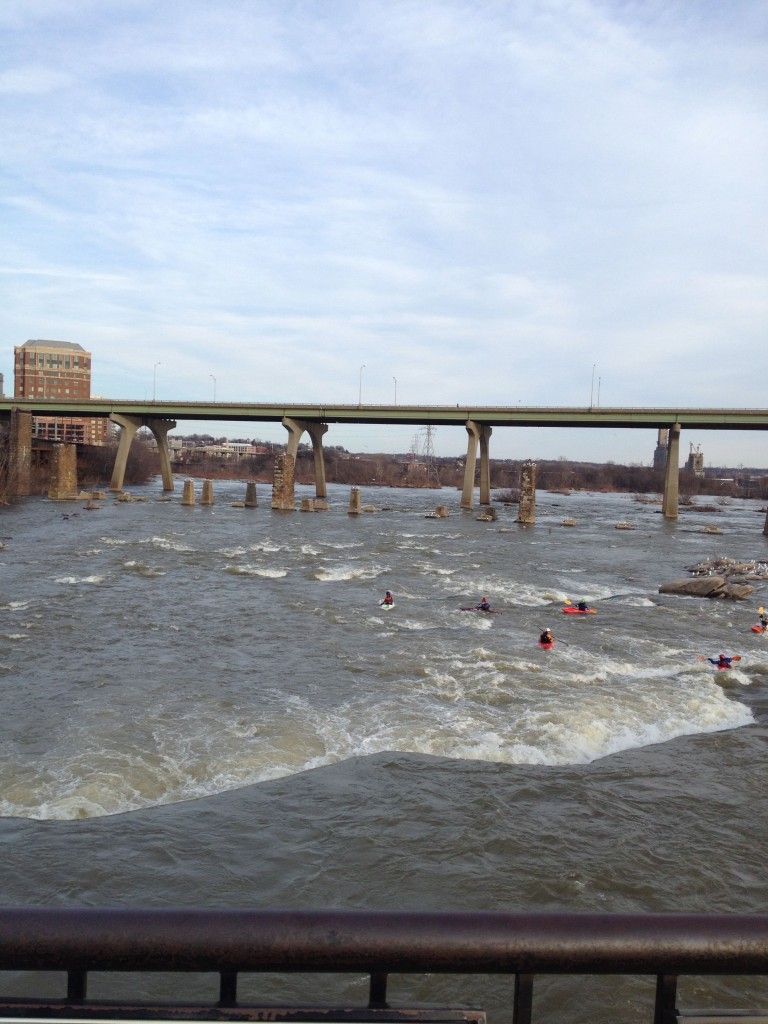 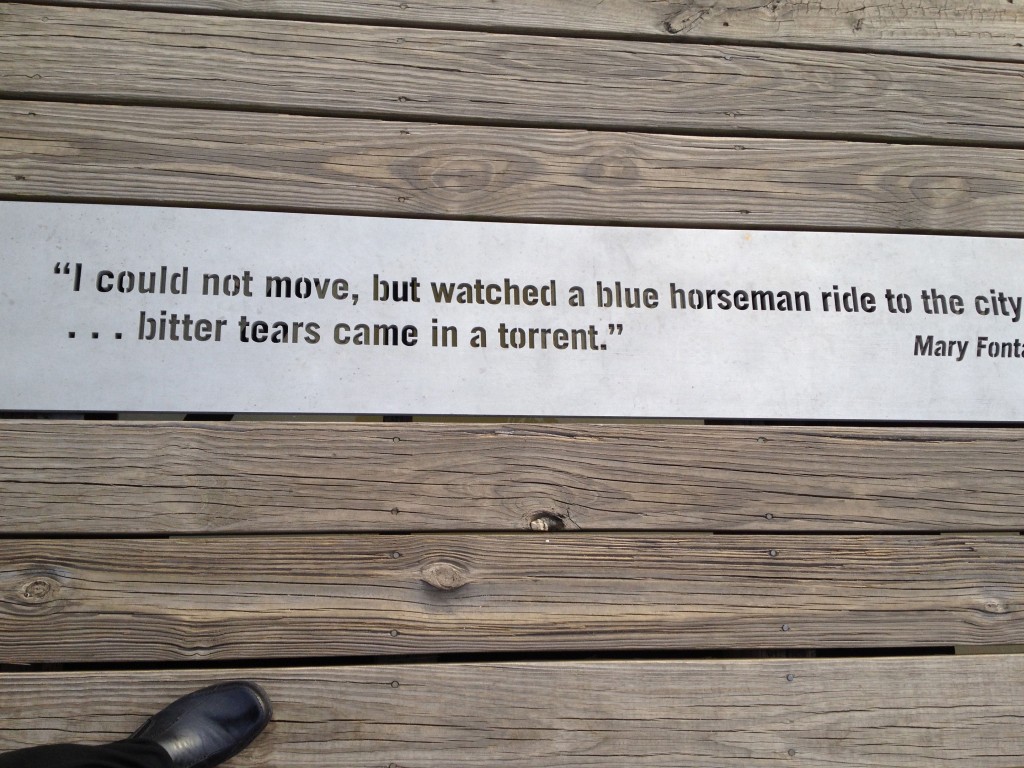 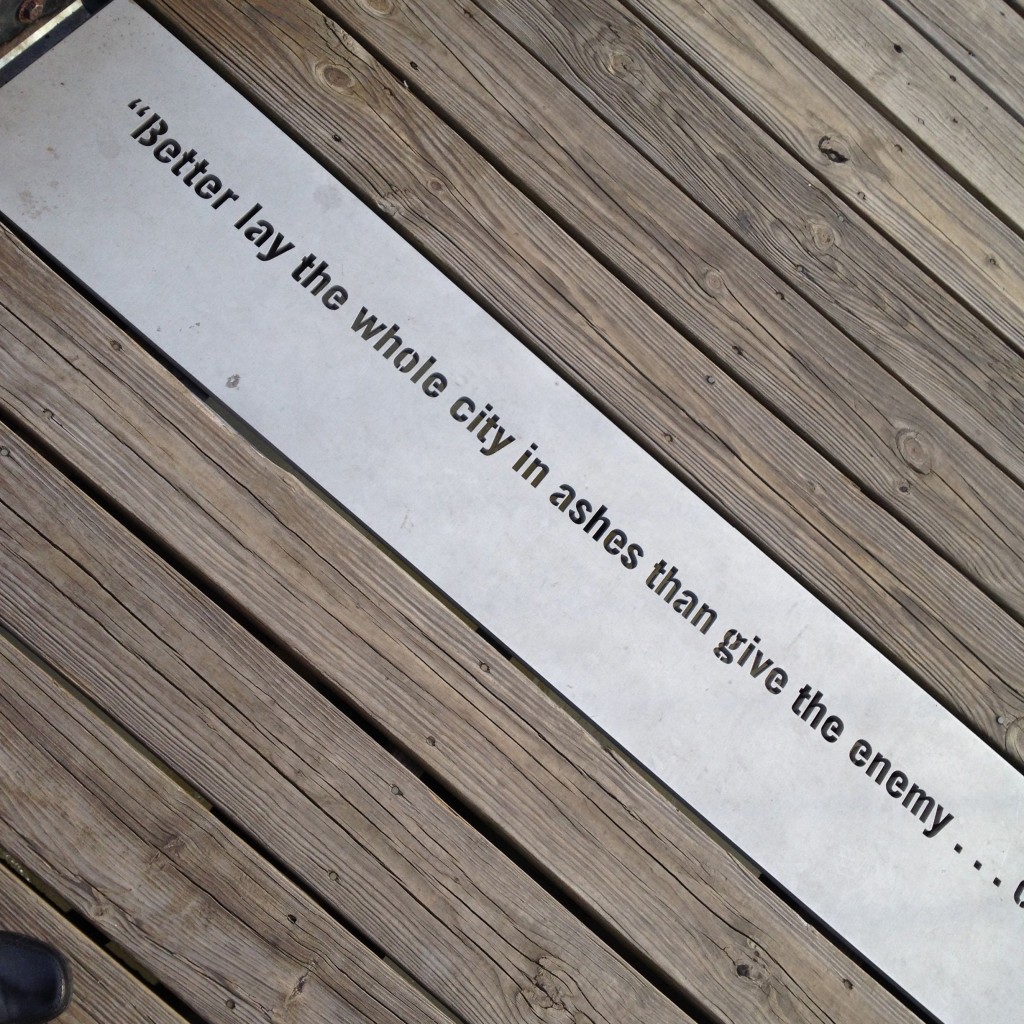 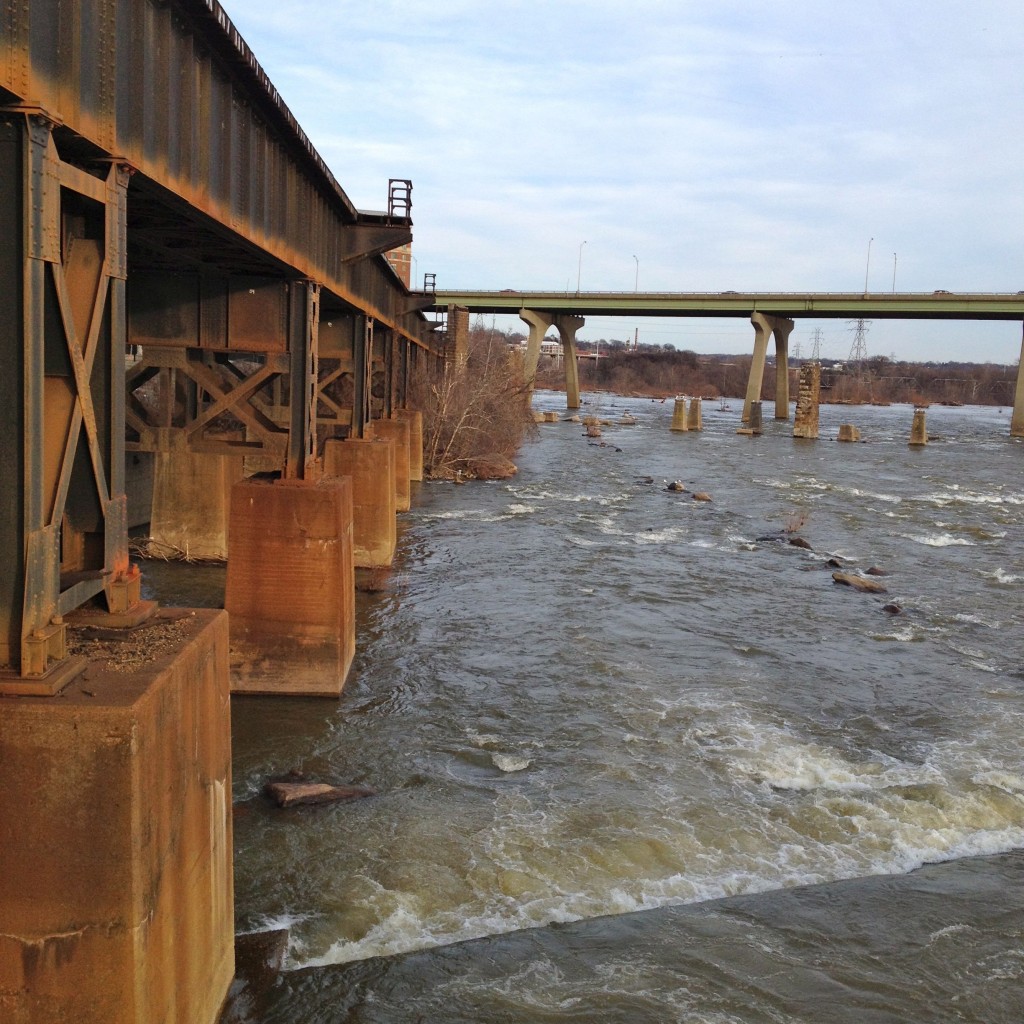