More nativities from my collection: 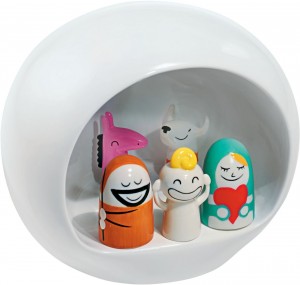 Alessi Presepe Nativity Scene Manger, in porcelain. Hand-decorated, white. The project is a dialogue with the intriguing world of porcelain figures and especially with the refined tradition of european manufactured items from the eighteenth century onwards, using contemporary artists. Design by LPWK and Massimo Giacon, 2007. By Alessi. Combining two great traditions, the nativity scene and Christmas decor, LPWK and Massimo Giacon introduce the Presepe Group. (There are actually several more figures.)  Made by Alessi in Italy. 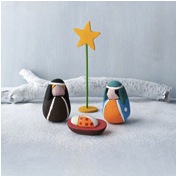 This four-piece abstract nativity is made from ecologically harvested balsa wood, carved and painted to create this familiar scene in a new and colorful way.  It is from Ecuador.

and another one from Ecuador: 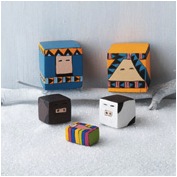 Ecologically harvested balsa wood is carved, burned, and painted by hand to create this funky little 5-piece nativity. Fun to arrange and stack! 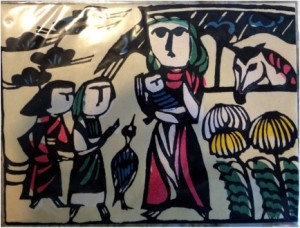 This is a  Sadao Watariabe (artist) Japanese artist watercolor. 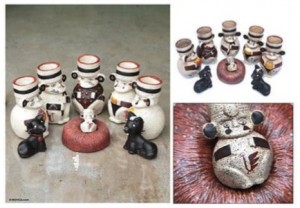 Peru’s cultural syncretism inspires the beautiful ceramic art of Alberto Aparicio Canchari. He characterizes the Holy Family and the Three Kings according to the customs of the Chancay people. The Chancay culture flourished in central Peru between 1200 and 1470 A.D., and was renowned for its skilled agricultural techniques. Canchari designs, crafts and paints each figurine in this nativity set containing nine pieces. 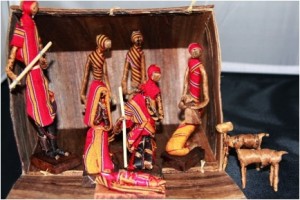 This Nativity scene is handcrafted by native women in Uganda. The figures are made from wire frames wrapped ingeniously with banana fiber and then dressed in traditional kitenge fabric in shades of red. The scene contains 10 figures: Joseph, Mary, the baby Jesus, two shepherds, two sheep, and three wise men kneeling with their gifts. The standing shepherds are 5.75 inches tall. The stable’s exterior is banana leaves, while the interior is lined with bark cloth. The star is also lined with bark cloth. The stable is 7.25 inches tall (to top of star).

Kitenge fabric is a communicating textile—the various colors, patterns, writings, and symbols represent moods, feelings, cultures, and traditions of native African people. It is worn similar to the sarong, often wrapped around the chest or waist, over the head as a headscarf, as a baby sling or tailor-made into a dress.

Bark cloth has a rich history: the inner bark of the Mutuba tree has been crafted by Bagandan artisans into cloth for over 600 years. It has a strong place in their culture as it is still used by the royal family, traditional healers, and as a burial shroud at funerals. This unique process of changing bark into cloth begins with the removal of the outer bark of the Mutuba tree, exposing an under-layer of moist, fleshy trunk. Horizontal and vertical cuts are made the length of the tree, allowing the artisan to use an angled banana stalk to peel away the inner bark. What falls away from the tree is a narrow section of bark. Banana leaves are cut and wrapped around the exposed trunk, keeping it moist and allowing the bark to grow back within a year. To deepen the rust color of the bark, dried banana leaves are placed on top of it and set on fire. The artisan carefully brushes off the ash, washes it and then wraps it in fresh banana leaves, keeping it moist so it can be worked. The next day the artisan begins creating bark cloth by repeatedly pounding it with a grooved mallet as has been done for generations. Each carefully placed hit leaves its grooved impression on the surface of the bark. With time the bark slowly widens, softening it into cloth. After five hours of constant laborious pounding, the artisan finishes the cloth. He lays it fully in the sun, pulling it tight while laying rocks around the edges.

NAWOU, The National Association of Women’s Organizations in Uganda, is a non-governmental organization representing over 1000 women’s groups in Uganda. Winston Churchill described this lush, fertile country as “the pearl of Africa.” The goals of the organization are: 1) to coordinate networking between women’s groups, 2) to bring women together to deal with issues of common concern, 3) to respond to requests for technical assistance to help women achieve their professional goals, 4) to make resources available which will help women achieve their goals, and 5) lobby the government and local organizations on issues affecting women.

And links to other pages with nativities from around the world page 1, page 2, and page 3